Astronomers question why a supermassive black hole in the Phoenix Cluster doesn't disrupt star formation like its peers do. 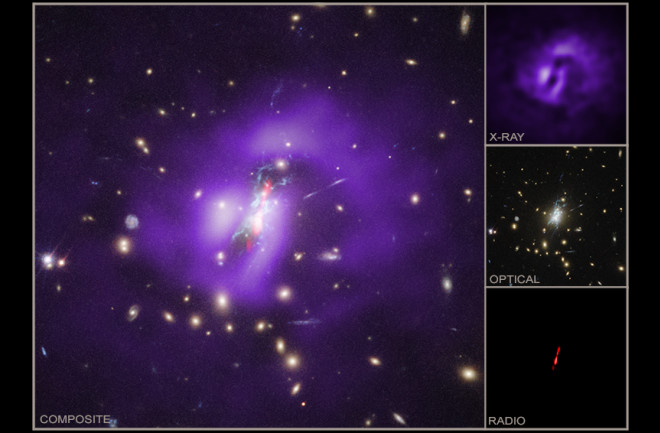 For the first time, astronomers have spotted active bursts of stars forming in a galaxy at the center of a dense cluster. In galaxy clusters, supermassive black holes in the central galaxies typically heat up gases, keeping them from condensing into new stars.

But a galaxy cluster called the Phoenix Cluster is forming stars in its center despite its largest galaxy’s central supermassive black hole, a team of astronomers found. This leaves the scientists questioning why this supermassive black hole isn’t preventing star formation like its peers do. The researchers presented their findings in a recent paper in The Astrophysical Journal.

Galaxy clusters are, in a simple sense, big balls of gas, said Michael McDonald, an astronomer at MIT and one of the authors of the new paper. Over time, parts of the gases cool and sink toward the center of the cluster. If gases are cool enough, they can condense into clumps and eventually get dense enough to become stars.

But in almost all of the galaxy clusters that astronomers have observed, a supermassive black hole in the cluster’s central galaxy puts lots of energy into the surrounding gas. This reheats gas in the center of the cluster so it can’t form stars.

In 2012, a team of astronomers including McDonald pointed out one galaxy cluster that seemed unusual. Most galaxy clusters emit a lot of reddish light from their centers, a sign that most stars are on the older side. But the Phoenix Cluster had a bluish center. That implied that the Phoenix Cluster was either forming lots of new stars in its center, which would give off this bluish light, or that something else in the center of the cluster was creating blue light.

Seven years later, McDonald and others have gathered many more observations to get a detailed look at what’s happening in the center of the Phoenix Cluster. They were able to capture light from young, newly formed stars and see that those new stars were in the same locations as cool gas in the cluster. It appears that the Phoenix Cluster is forming new stars in its center despite the central galaxy’s supermassive black hole.

The big question that remains is why this black hole in the center isn’t keeping stars from forming, like in other clusters. It looks like the black hole is active now, because researchers have spotted it shooting jets of energetic material into its surroundings.

One possibility, McDonald said, is that the black hole wasn’t putting out enough energy in the recent past to keep stars from forming. If that’s the case, it brings up another question astronomers will need to investigate: Is this an unusual phenomenon? Or do galaxy clusters typically go through a phase in which lots of stars form in their centers, but the phases are so brief that we’ve only spotted one example out of many so far?

Either way, McDonald is excited to be studying this odd case.

“It’s fun when you have to come up with a new story,” McDonald said. “Confirming existing theories is nice work, but finding rule-breakers is fun.”