Storms on Other Worlds

Lightning might last only an instant, but it can shape a planet’s atmosphere and even spark life. 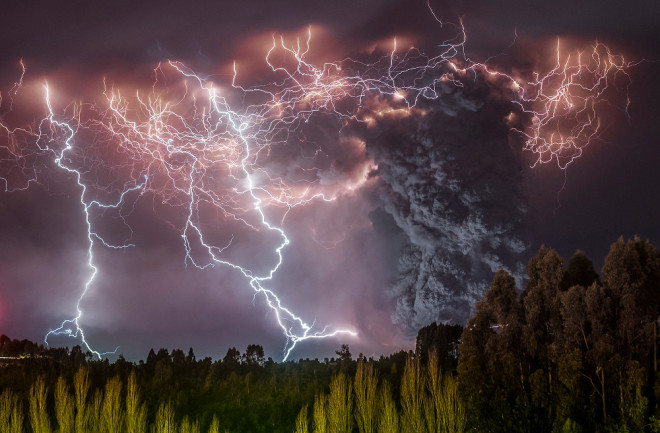 One of nature’s most electrifying light shows, lightning can occur in watery clouds, ashy volcanoes or even extrasolar worlds. Here, the Puyehue-Cordón Caulle volcanic complex in Chile lights up the sky. (Credit: Francisco Negroni)

On March 5,1979, the Voyager spacecraft hurtled past Jupiter and sent back a grainy snapshot of something previously spotted only on Earth: bursts of lightning. It was proof that our home planet isn’t alone in atmospheric spectacle.

But it wasn’t surprising. After all, lightning is just a rush of electrons leading to an electric spark on an atmospheric scale — any atmosphere. In the years since, spacecraft have spotted bursts of lightning elsewhere in our solar system, from the cloud tops of Venus, to Saturn’s moon Titan, to an electrical storm so big and bright on Saturn itself that it shone even during the day.

Similarly, powerful streams of electricity almost certainly crackle in the skies of thousands of exoplanets strewn throughout the galaxy. But so far, there’s no proof. German physicist Christiane Helling of the University of St. Andrews in Scotland wants to spot that extraterrestrial lightning, hundreds of thousands of light-years away. And since we don’t yet have faster-than-light travel, she’ll do it with increasingly powerful telescopic observations.

That search matters because lightning may come and go in an instant, but its electrical crackling can alter the chemical makeup of the air around it. In fact, the effects of lightning are so great that it might just be a vital ingredient of life itself.

Lightning, in all its forms, starts with clouds. So did Helling’s research. She’s always loved what she calls “small physics,” the interactions of particles on a scale too small to see with the naked eye. In 2001, while a postdoc at the Technical University of Berlin, she developed a computer model called Drift. The name refers to the way microscopic particles ebb and flow within a cloud, pulled around by gravity. She didn’t know it at first, but this research was the perfect setup for a burgeoning lightning researcher.

Helling used the model to simulate how dust whirls and swirls around in the atmospheres of brown dwarfs: gassy bodies too big and warm to be planets, but too small and cool to be stars. By studying the light from these “failed stars,” astronomers can learn what they’re made of. So far, they’ve found many familiar molecules like oxygen and carbon dioxide, as well as minerals like silicates and iron.

Using Drift, Helling found that these molecules can form what she calls “gemstone clouds” since the silicates and metals that comprise them most likely make them appear glittery and colorful. In the clouds in her model, atmospheric gas would sometimes condense onto the shimmering dust particles, increasing in size to a few millimeters big. That’s where the possibilities get interesting, because these particles often collide, producing a charge, the makings of lightning.

Here on Earth, our storm clouds are made of charged water droplets and hailstones. But water is not essential for lightning; it’s just the medium that carries around electrons. In fact, small lightning storms often occur in volcano dust. As ash swirls around in the aftermath of a violent eruption, it, too, can become charged.

That sets the stage for lightning. The different charges within the cloud — whether spawned from gemstones, water or ash — create an electric field. Any free electrons would rush, attracted, to the positive side, akin to a ball falling through Earth’s gravitational field. Get enough electrons colliding and “falling,” and boom — you’ve got lightning.

Helling showed that the glittery clouds on brown dwarfs can create such charges. Then, in 2009, she wondered if these dusty clouds might be the foundation for strange alien lightning storms.

That same year, astronomers began finding multitudes of planets beyond our solar system. Exoplanets and brown dwarfs are different in many ways, but for Helling’s purposes — clouds and what can happen inside them — they are quite similar. And while both types of worlds are not directly visible from Earth, researchers can determine the chemical makeup of their atmospheres with today’s telescopes. Using that data, Drift revealed that gaseous exoplanet atmospheres were just right for giving rise to glittery gemstone clouds, too.

At the University of St. Andrews, Helling started a research group named Life, Electricity, Atmosphere, Planets (LEAP). The goal: to find out if lightning exists in these new worlds, and pave the way for others to discover just what the implications might be.

Figuring out how a burst of lightning begins in the first place amid swirls of dust was key to Helling’s computer models. Luckily, analogs of extrasolar clouds exist here on Earth. “The exciting thing is [their] composition is similar to what we know of volcanoes,” says Helling.

Stanley Miller (pictured), along with Harold Urey, showed in a 1950s experiment that electricity might be a key component for establishing life. (Credit: UC San Diego)

In 2013, Corrado Cimarelli, a volcanologist at the LMU University of Munich, re-created volcanic lightning in his lab by pushing dust into a small glass tube at extremely high pressure. He took slow-motion footage, elucidating the small physics of the lab-made lightning. What flashed on the screen was a spray of black grains, released from a pressurized tube like water from a fire hose, with little bursts of electricity — veins of white just centimeters long.

Adding laboratory data like this to Drift, Helling found that lightning could happen on both gaseous exoplanets and brown dwarfs — in bolts as large as the Empire State Building. Cimarelli’s lab-made lightning, using the same kinds of materials as the gemstone clouds, suggests that streamers are most likely to occur when dust is pelted together quickly. This suggests that lightning might be most likely on planets with plenty of light and radiation from a host star to create wind.

With gemstone clouds — and their attendant lightning — more common than she could have imagined, Helling knew for certain that alien lightning could flash in atmospheres all across our universe. But how could she ever tell? These worlds are too far away to see directly. It’s not simply a matter of sending a space probe or pointing Hubble toward the nearest exoplanet.

To figure out how to look for actual proof of extrasolar lightning, Helling combined Drift’s code with another atmospheric model called Phoenix, created by astrophysicists at the University of Hamburg. Phoenix placed the individual clouds that Drift could model into the context of a whole planet. Using results from Drift-Phoenix, Helling made the first steps toward figuring out exactly what telltale elements lightning would leave behind in a world’s atmosphere. It turns out that where there is lightning — whether on Earth or worlds away — there is slightly more methane and carbon monoxide.

Today’s observatories capture just the big features of an atmosphere; they aren’t yet sensitive enough to pick up the trace amounts of the chemicals lightning would leave behind on other worlds. Fortunately, more powerful views of exoplanets are on the horizon when the James Webb Space Telescope launches in 2018. The unparalleled view it will provide to astronomers could include a glimpse of a stormy world. But that’s not all that finding lightning’s signature would mean.

More strikingly, lightning may also be a key catalyst for spawning life. An experiment by biochemists Stanley Miller and Harold Urey over 60 years ago established that, if you take the wet, disorganized ingredients found on early Earth — water, ammonia, methane, hydrogen — and add an electric spark, you get amino acids, the building blocks of all known life.

That doesn’t mean that lightning equals life. Far from it. Liquids are rare, and astrobiologists think that gaseous planets, the kind that Helling has studied so far, aren’t as likely to harbor life as Earth-like rocky ones. But habitable planets are a tantalizing prospect, one that Helling references in the very name of her LEAP project. In the search for life, lightning could be a key clue.

We might not ever be able to see extraterrestrial lightning firsthand. But how electrifying to know that where there’s lightning, there just might be something to stare back up at it.