Neutrinos Provide a New Way to Probe the Cosmos 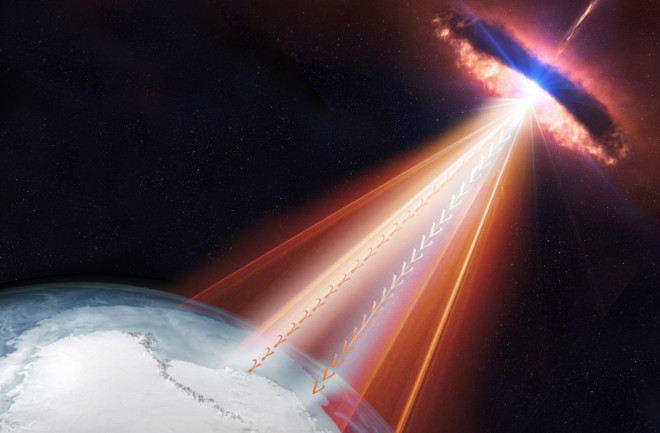 Astronomers detected the exotic particles spewed by a blazar, as in this fanciful rendering. (Credit: IceCube/NASA)

We’re figuring out how to see the cosmos in a new way. For centuries, humans learned about the universe with just their eyes, observing in visible light. We eventually developed technology to see in other wavelengths of light — infrared, X-ray, gamma ray — to discover even more about the universe. Now, thanks to two papers in Science in July, astronomers can see with neutrinos, too.

Neutrinos are thought of as ghostly particles because they interact so little with matter. Trillions of the subatomic things pass through your body and the rest of the planet every second, without disturbing any atoms. This indifference to anything in their way makes them ideal for astronomers hoping to understand the extreme environments that can produce them and other interesting but easily blocked particles, like cosmic rays and extremely energetic light.

“Light is whatever’s on the outside of an object,” says University of Maryland physicist Erik Blaufuss, a co-author on both papers. The sun’s light, for example, emerges at its surface, whereas solar neutrinos are created deep within the star. “Neutrinos really are deeper probes on the internal workings of the object.”

The hard part is actually catching a neutrino, especially one from a distant source, but that’s what the IceCube observatory in Antarctica did in September 2017. A particularly energetic neutrino got caught in the cubic kilometer of ice that serves as the observatory’s detector. Astronomers soon realized they could trace its trajectory back to a specific type of black hole, known as a blazar, in a galaxy 3.7 billion light-years away.

That alignment could have just been coincidence, but then other observatories reported a surge in energetic gamma rays coming from the same black hole around the same time as the neutrino’s arrival. The overwhelming likelihood is that the black hole spewed out both the gamma rays and massive amounts of neutrinos, including the one IceCube caught.

The IceCube facility in Antarctica found a ghostly neutrino particle last summer, thanks to detectors spread within a cubic kilometer of ice. (Credit: Jamie Yang/IceCube)

It’s the first time scientists have identified the origins of a high-energy neutrino, and, in another first, learned that black holes can create them — though they still don’t know exactly how.

“The field of neutrino astronomy has become a reality. For decades it has been a dream of many to harness high-energy neutrinos as one of nature’s ideal astronomical messengers,” says University of Alberta astroparticle physicist Darren Grant, study co-author and IceCube spokesman. “This detection has opened for us a new window with which to view the universe, much the same as the discovery of gravitational waves did recently” at the Laser Interferometer Gravitational-wave Observatory (LIGO).

And with the upgrade known as IceCube-Gen2 hopefully coming online in the next few years, along with an upgraded LIGO in 2019, scientists are excited for a combined measurement of neutrinos, gravity waves and light.

“Bringing all of the information from these messengers together, each contributing unique elements, holds enormous potential for what we may learn,” says Grant.