Speeding Interstellar Object ‘Oumuamua Is A Comet, Not An Asteroid 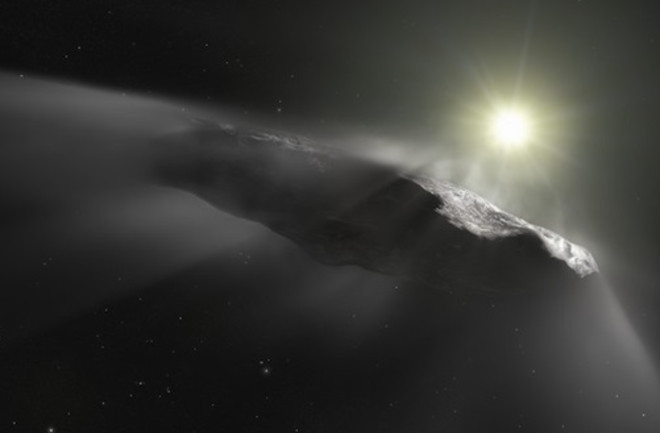 ‘Oumuamua, the first-known interstellar interloper, is seen venting gas and dust in this artist’s concept. (Credit: ESA/Hubble, NASA, ESO, M. Kornmesser) Ever since Rob Weryk first spotted ‘Oumuamua zipping through the solar system in October 2017, the peculiar object has been the target of intense scrutiny for astronomers from around the globe. After confirming the suspected asteroid reached a maximum speed of nearly 200,000 miles per hour during its closest approach to the Sun (and is shaped like a cigar), researchers quickly shifted their focus to determining the composition and origin of this mysterious object. In a study published this March, astronomers suggested that ‘Oumuamua may be an asteroid that flew by our solar system after being ejected from a binary star system. Though they relied on models to show this was a possibility, at the time, lead author Alan Jackson noted, “It’s really odd that the first object we would see from outside our system would be an asteroid, because a comet would be a lot easier to spot, and the solar system ejects many more comets than asteroids.” Now, by combining telescopic data from the Hubble Space Telescope and other ground-based observatories, an international team of astronomers have shown that ‘Oumuamua is indeed a speed-boosted comet rather than an asteroid, which is what astronomers previously thought. In the new study, published June 27 in the journal Nature, researchers determined that ‘Oumuamua is slowly and steadily accelerating away from the Sun, which means it’s currently traveling faster than is predicted by celestial mechanics — a very well-understood branch of astronomy that deals with the motions of cosmic objects. “Our high-precision measurements of ‘Oumuamua’s position revealed that there was something affecting its motion other than the gravitational forces of the Sun and planets,” said team-lead Marco Micheli of the European Space Agency in a NASA news release. https://www.youtube.com/watch?v=imKjVEVq_vs The researchers explored a number of possible scenarios in an attempt to explain the faster-than-expected speed with which ‘Oumuamua is hurtling out of the solar system. But after considering all the possibilities (such as solar-radiation pressure, friction-like forces, and magnetic interactions with the solar wind), the team concluded the most likely explanation is that the Sun is causing ‘Oumuamua to vent gas and dust from its surface in a process called outgassing, which almost exclusively occurs in icy comets, not rocky asteroids. This ejection of material — which is caused by the Sun evaporating or sublimating the gases trapped just below ‘Oumuamua’s surface — generates a tiny amount of thrust. And though this outgas-induced thrust is small, according to the researchers, it is enough to account for ‘Oumuamua’s observed boost in speed. “We think this is a tiny, weird comet,” said lead author Marco Micheli, from the European Space Agency (ESO), in a press release. “We can see in the data that its boost is getting smaller the farther away it travels from the Sun, which is typical for comets.” However, the researchers point out that ‘Oumuamua doesn’t seem to be outgassing like most other comets found within the solar system. Specifically, when comets from our solar system are heated by the Sun, outgassing typically leads to the ejection of visible material, which forms a hazy cloud around them called a coma, plus a characteristic tail. However, for ‘Oumuamua, researchers found no visual evidence of these features. “We did not see any dust, coma, or tail, which is unusual,” said co-author Karen Meech of the University of Hawaii. “We think that ‘Oumuamua may vent unusually large, coarse dust grains.” These large dust grains — which, surprisingly, are more difficult to spot than smaller grains — may be faint, but they are also massive enough that their ejection generates sufficient thrust to account for the unexpected increase in ‘Oumuamua’s speed. Furthermore, the researchers propose that ‘Oumuamua may be ejecting large grains because all of the smaller dust grains that adorn most cometary surfaces already eroded away during its long trek through interstellar space. https://www.youtube.com/watch?v=zDUn_AV0HS0 Although the suspected outgassing seems to tell us a bit about the composition of ‘Oumuamua, unfortunately, it also makes determining the origin of this puzzling object that much more challenging. “The true nature of this enigmatic interstellar nomad may remain a mystery,” said co-author Olivier Hainaut of the ESO. “’Oumuamua’s recently detected gain in speed makes it more difficult to be able to trace the path it took from its extrasolar home star.”