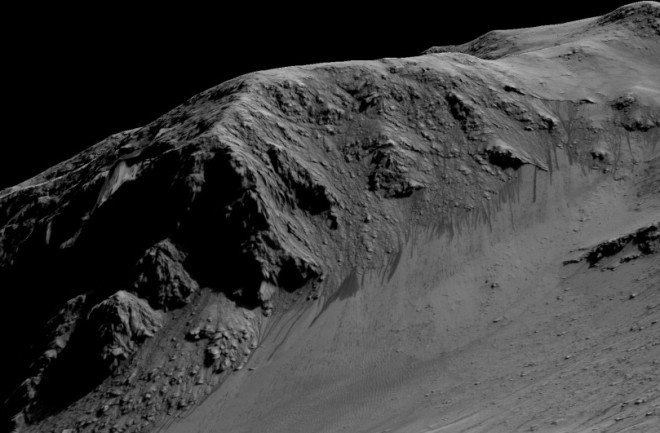 The dark, narrow streaks flowing downhill in this crater on Mars are inferred to be formed by seasonal flow of liquid water. The streaks are roughly the length of a football field. (Source: NASA/JPL-Caltech/Univ. of Arizona) If you've paid attention to the news at all today, you've probably heard about the compelling new evidence that liquid water flows on Mars — present tense. The news has gotten a lot of coverage today. Among the best is a post by Cory Powell, my fellow blogger here at Discover. You can find his excellent summary of the science, and why it is significant, right here. I decided to dedicate my post to spectacular imagery, including the dramatic image above. You're looking at Horowitz Crater on Mars. The image is based on data from the High Resolution Imaging Science Experiment, or HiRISE camera, on NASA's Mars Reconnaissance Orbiter. Look for the dark streaks fanning out from the base of the more rugged terrain. These "recurring slope lineae" have been seen on Mars before, and scientists have suspected that they were traces left by running briny water. Now, a spectrometer on the orbiter has revealed hydrated salts on the slopes at Horowitz Crater, corroborating the hypothesis.

This series of images, acquired by NASA's Mars Reconnaissance Orbiter, shows streaks in Newton crater on Mars that grow during the planet's warm season and fade in the cold season. (Source: NASA/JPL-Caltech/Univ. of Arizona) The stunning animation above was released by NASA back in 2011. It shows the same kind of streaks — the recurring slope lineae — this time in Newton Crater. They grow during the Martian warm season and shrink during the cool season. At the time, scientists thought that warming conditions allowed frozen briny water near the surface to thaw and flow downhill. But more data were needed. The spectrographic evidence released by NASA today seems to cinch the case. In the animation, the streaks are about one-half to five yards wide. They extend downslope from bedrock outcrops, and they are often associated with small channels.

Recurring slope lineae are visible in this image of the walls of Garni Crater on Mars. (Source: NASA/JPL-Caltech/Univ. of Arizona) This image, also from the Mars orbiter and released by NASA today, reveal yet more streaks. Up to few hundred yards long, these are on the walls of Garni Crater on Mars. The water believed to have formed these streaks is probably way too salty to support life. But as Cory Powell noted in his post today:

Where there is some water, there is probably more. We don’t know if the salts are absorbing water from the atmosphere or if the water is coming from some other source. Either way, today’s news indicates that there is more water on Mars, moving in a more complicated cycle, than scientists thought before. That increases the likelihood that there are other spots (underground, almost certainly) that have more life-friendly water sources. In the words of Jim Green, NASA’s director of planetary science, “Mars is not the dry, arid planet that we thought of in the past.”

NASA’s Mars2020 rover, scheduled for, well, 2020, might help scientists dig deeper to see if more water really does lurk beneath the surface. As Powell reports, it will carry ground-penetrating radar that might be able to detect buried aquifers.