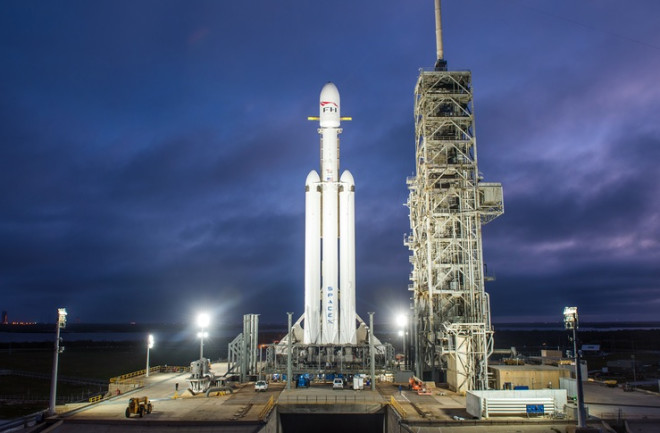 The Falcon Heavy on the launchpad. (Credit: SpaceX)

SpaceX’s Falcon Heavy rocket may fly again as soon as April 7, if the reporting of CNBC proves accurate. The news outlet cites anonymous sources in its story, and SpaceX so far hasn’t confirmed the launch. The rocket’s first and last flight was in February 2018, when it successfully launched Elon Musk’s Tesla roadster into space.

Falcon Heavy’s next mission would fly a communications satellite into space for Arabsat, a Saudi Arabian company. It would launch from SpaceX’s usual site at Kennedy Space Center’s Launchpad 39A in Florida.

Falcon Heavy is a monster version of SpaceX’s usual Falcon 9 rocket. It combines three Falcon 9 rockets (each composed of 9 individual rockets, as their name implies) for its first stage. Each of these can theoretically be landed and reused for future missions. During its first flight in 2018, only the two side-boosters were recovered. The third, middle rocket, which is reinforced and separates later during launch, failed its landing attempt.

SpaceX has yet to confirm the April launch at all, but based on past missions, they will probably try again to recover all three boosters.

If Falcon Heavy does launch its first commercial mission next month, it would be a positive sign for the company’s heavy lift plans.

Just last week, NASA said it was considering turning to private companies for heavy lift missions like the first pieces of the Lunar Gateway space station, and the first flight into lunar orbit for its Orion crew capsule. The space agency has spent years and billions of dollars building its own massive Space Launch System, which was supposed to deliver those mission. But SLS’ schedule of tests and flights have repeatedly slipped.

SpaceX’s Falcon Heavy plans have also slipped. The company originally planned to launch the Falcon Heavy as early as 2013. So a launch in April could move the bar for both SpaceX and NASA’s ability to launch heavy cargo.