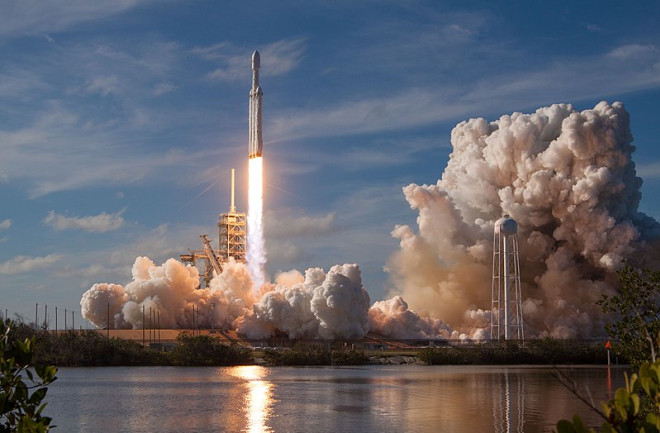 The test firing this morning went well, and mission managers are now targeting a launch on April 9. This is a slight delay from the earlier April 7 launch date, and SpaceX CEO Elon Musk warns the date might slip again.

Falcon Heavy is essentially made of up three Falcon 9 rockets strapped together, though the center core is substantially strengthened so it can support the two side boosters, which are regular Falcon 9 rockets. It’s also worth remembering that Falcon 9 bears its name because it’s made up of nine individual rockets. So Falcon Heavy gets its enormous lift from firing 27 rockets at once. That’s necessary to launch the Arabsat 6 communications satellite, which weighs over 13,000 pounds. Like Falcon Heavy’s demo flight last year

, when it launched a Tesla Roadster into space, SpaceX will attempt to land the individual boosters. In 2018, both side boosters touched down safely, but the center core failed to light two of the three engines it uses for landing, and crashed into the ocean near the drone ship “Of Course I Still Love You.” Once again, the two side boosters will attempt a landing at Cape Canaveral. The standard Falcon 9 boosters have had multiple successful landings at this point, and they are expected to succeed and be reused for future missions. The center booster will again attempt an ocean landing on the drone ship, where there is more margin for error. Because of its reinforcements, it is heavier, and because it is the center core, it flies higher and faster than the side boosters, increasing the difficulty in landing. After the missed landing in 2018, Musk revealed that the center core didn’t have enough ignition fluid to light all of its engines for landing, and called the solution “obvious.” The true test will happen next week, if Falcon Heavy can not only launch but also land its three boosters. At the end of the month, on April 25, SpaceX is also expected to launch their more standard Falcon 9 rocket and Dragon cargo capsule for their 17^th supply mission to the International Space Station.