SpaceX's Crew Dragon Splashed Down Back On Earth, Safely Completing Its Mission 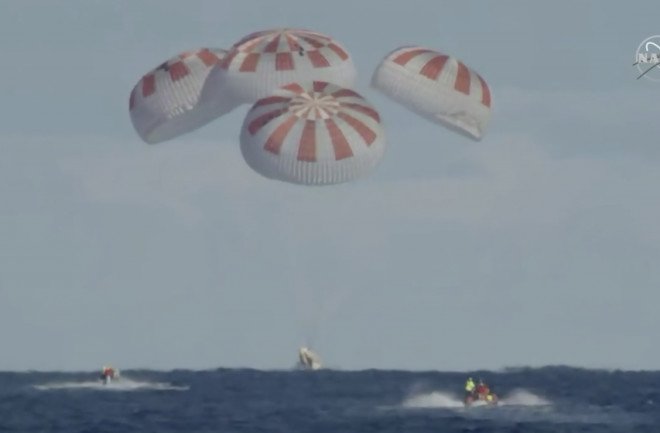 Cheers rang out at SpaceX’s headquarters as Crew Dragon’s parachutes deployed during a test on May 1, 2020. Shortly after, the capsule splashed down in the Atlantic Ocean, shown here. (Credit: NASA)

SpaceX’s Crew Dragon capsule departed the International Space Station early Friday morning and began a series of thruster burns that steered the ship back toward Earth, where it safely splashed down in the Atlantic Ocean not long after 7:30 a.m. EST. The craft had been attached to the space station since Sunday, when it made its first docking under its own power after a successful Saturday launch atop a Falcon 9 rocket.

This final phase of the Demo-1 mission was perhaps the biggest test of Crew Dragon’s new build. It had to successfully deploy an upgraded parachute system to land the more gently than the already proven cargo version. The parachute system in particular was under close scrutiny, since it will eventually be responsible for protecting human passengers.

SpaceX's Crew Dragon blazes through Earth atmosphere some 20 miles above the planet's surface, as captured by a NASA spacecraft Friday morning. (NASA)

SpaceX’s Crew Dragon blazes through Earth atmosphere some 20 miles above the planet’s surface, as captured by a NASA spacecraft Friday morning. (NASA)

The Dragon capsule that flew this week is not the final version that will fly in future tests, but it is close. At a pre-launch briefing, SpaceX Vice President of Build and Flight Reliability Hans Koenigsmann said that the company is still in the final stages of development on Crew Dragon’s internal controls.

Since the only passengers on Demo-1 were a dummy named Ripley, an Earth plushie, and cargo, the controls weren’t necessary for this flight. But now that Crew Dragon has safely flown to space and back, it’s likely that real-life astronauts may soon take the helm.

With NASA’s approval, SpaceX would proceed to a Demo-2 mission in July, where two astronauts will become the first to fly into space on a private craft. Before that, NASA and SpaceX will also run an abort test with the craft’s “Super Draco” thrusters. They’re designed to ensure the capsule can safely get humans back to Earth even if something goes wrong during or immediately after launch.

Crew Dragon’s splash down in the Atlantic Ocean also included a full test run of the medical personnel that are always on stand-by for crew recovery after space mission landings. It marked the first time a spacecraft designed for humans has splashed down in the Atlantic since the Apollo 9 capsule did so in March 1969.