The Crew-2 mission successfully reached orbit in the early morning hours on Friday, lighting up the Florida sky. 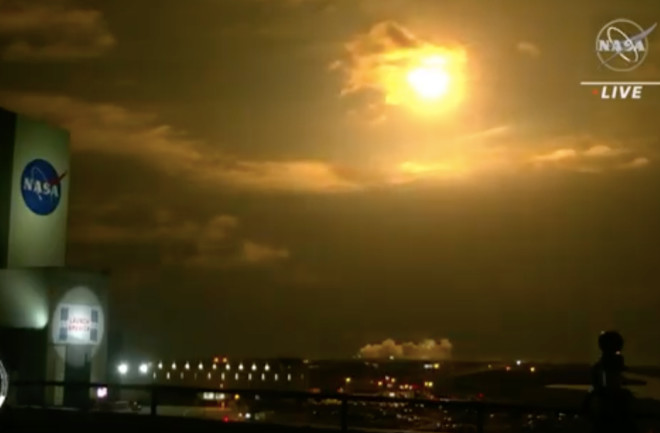 On Friday, April 23, the Crew-2 mission successfully carried four astronauts into orbit aboard a Falcon 9 rocket. The launch was broadcast live on NASA TV. (Credit: NASA)

Just before dawn broke at America’s Space Coast this morning, four astronauts were lofted safely into orbit aboard a SpaceX Crew Dragon capsule. The Crew-2 mission will rendezvous with the International Space Station (ISS) at around 5:10 a.m. EDT on Saturday, April 24.

Space fans and area residents who woke up early enough were treated to an incredible sight, as the launch lit up the Florida skies.

The Crew-2 launch was delayed on Thursday morning due to bad weather in the Atlantic Ocean, which could have complicated rescue efforts if they were needed. (Unlike other crew capsules that can land on dry ground, SpaceX’s Crew Dragon capsule lands by splashing down in water.)

Friday's launch went flawlessly, with the rocket's reusable first stage landing without incident on a drone ship in the Atlantic Ocean. It was the third successful crew launch for SpaceX in less than a year. And for the first time, the crew was flying on a rocket and capsule that had each flown before.

It’s a busy time on the ISS. Last Friday, NASA astronaut Kate Rubins and Roscosmos cosmonauts Sergey Ryzhikov and Sergey Kud-Sverchkov returned to Earth on a Soyuz capsule. And in the coming weeks, this latest batch of astronauts will replace the Crew-1 team, who are set to return home after completing the first operational flight of NASA’s Commercial Crew Program.

Friday’s Kennedy Space Center launch marks just the third time a private company has carried humans into orbit. But in the years ahead, NASA hopes these kinds of flights will become routine.

After retiring the space shuttle back in 2011, the federal government charged private industry with ferrying astronauts into low-Earth orbit so NASA could focus on deep space. But the Commercial Crew Program was beset by years of delays, and America has been forced to pay Russia for access to the largely American taxpayer-funded space station. Then, last May, SpaceX’s Demo-2 mission made history when it became the first private spacecraft to put humans into orbit, ultimately carrying two NASA astronauts safely to the ISS.

Having this many workers on the space station is already letting NASA place more focus than ever on scientific experiments in orbit. In the past, research time was limited because the space agency typically had no more than three crew members on the station at once.

But Crew Dragon’s ability to shuttle four astronauts at a time is unlocking significantly more hours to spend on science. The Crew-2 astronauts are slated to carry out more than 200 experiments during their six-month stay.

Now that SpaceX is proving itself a reliable partner, the commercial crew pressure is shifting to Boeing, which was also awarded a contract under the program to transport astronauts to the ISS.

The iconic American aerospace company Boeing yet to fly a single successful crewed flight. Boeing has scheduled their first crewed test launch for this fall, though the timeline has repeatedly slipped in recent years.

Meanwhile, SpaceX is moving beyond simply carrying space agency astronauts into orbit and will soon carry space tourists, too. In conjunction with Axiom Space, another private spaceflight company, SpaceX’s Crew Dragon will carry four private citizens (including one former astronaut) to the ISS within the next year.

Subject to NASA approval, the private crew will spend 8 days on the U.S. segment of the ISS. That launch is expected to happen sometime after January 2022.