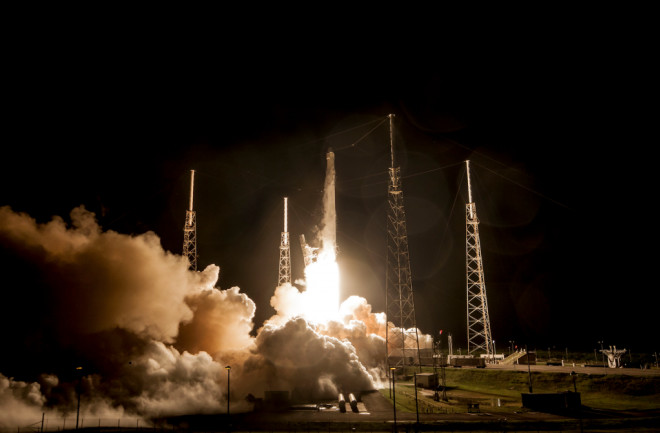 A September launch of the Falcon 9 rocket. (Credit: Courtesy SpaceX)

SpaceX is about to attempt something brand-new in space exploration — a controlled landing of one of its rockets to allow it to be used again. And you can watch it all online here.

At 6:20 a.m. EST Tuesday, SpaceX will launch one of its Falcon 9 rocket ships into space to accomplish the company’s fifth unmanned resupply mission to the International Space Station. While the mission itself is routine, the Falcon 9’s return to Earth will not be. Rather than crash-land into the ocean like most rockets, SpaceX hopes to guide the 14-story-tall, first stage of the Falcon 9 to a soft landing aboard a platform in the Atlantic Ocean.

If SpaceX makes this rocketry trick shot, it’ll be a huge step toward the company’s ultimate goal of making space travel less expensive through the use of reusable rockets. You can watch the historic attempt via the live webcast below starting at 6 a.m. EST (1100 GMT).

Tomorrow could mark a major milestone in the history of rocketry, but there’s a reason this has never been done before. Safely landing a rocket from space is really, really difficult. Even SpaceX chief executive Elon Musk isn’t overly optimistic about the chances of success on Tuesday. Musk put the chances of a successful landing at less than 50 percent, the New York Times reports.

After the Falcon 9 launches, the first stage of the rocket will fall away and the second stage will continue to ferry the Dragon cargo capsule packed with 5,000 pounds of food, supplies and lab experiments to the ISS. However, once the first stage of Falcon 9 is disengaged, it will fire its engines and return to Earth. Its target? A 300-foot by 170-foot unmanned, floating platform roughly 200 miles off the coast of Jacksonville, Florida.

In two prior successful cargo missions, the Falcon 9 first stage returned to Earth and slowed down enough to hover above the surface of the ocean before splashing down. During those previous attempts, SpaceX engineers were happy landing the craft within six miles of the projected target. On Tuesday, however, the margin of error is an area of just 33 feet, SpaceX representatives wrote in a Dec. 16 mission update. To make things more difficult, the landing pad will not be anchored (though it will be equipped with position-stabilizing thrusters).

When the Falcon 9 first stage returns to Earth, it will be traveling at a speed of roughly 1 mile per second, which means slowing down is priority number one. To accomplish this, the Falcon 9 engines will relight in a series of three burns: one to adjust the position of the vehicle, a second to slow the Falcon 9’s speed, and a final landing burn to bring the craft to a soft touchdown.

The rocket for launch tomorrow is also fitted with four hypersonic grid fins that move independently to adjust the craft’s roll, pitch and yaw as it approaches the landing target.

The idea to land a rocket on a platform has been around for decades, but this is the first attempt to pull it off. Even if Tuesday’s landing isn’t a success, SpaceX plans to perform more experiments over the dozen or so flights it has scheduled this year.

“I think it’s quite likely, 80 to 90 percent likely, that one of those flights will be able to land and refly,” Musk told the New York Times.

Reusing spacecraft is a key goal for SpaceX. Rockets are multimillion dollar, single-use machines that become fish habitats once they return to Earth and sink to the bottom of the ocean. Reusing pricey rockets could cut the cost of space travel by a hundredfold, according to SpaceX. Eventually SpaceX plans to launch, land and reuse both stages of the Falcon 9 rocket.