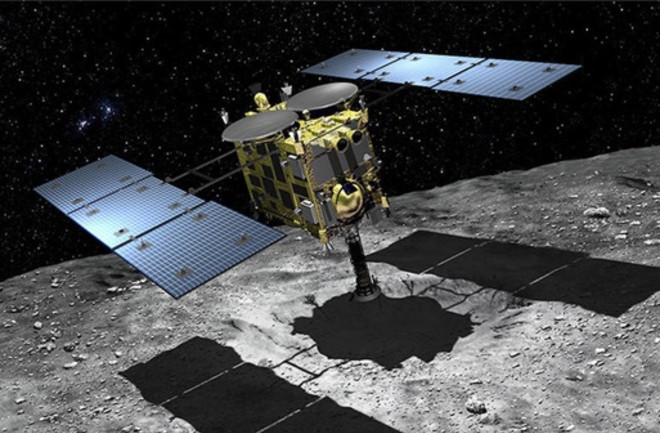 This artist's concept shows Japan's Hayabusa spacecraft collecting tiny dust grains from the asteroid Itokawa. (Credit: JAXA) Japan's asteroid-visiting Hayabusa spacecraft wasn't a complete disaster, but it definitely got off to a rocky start. Launched in 2003, the world's first sample-return mission was quickly sidelined when it was struck by charged particles from a powerful solar flare shortly after its launch. Despite this, Hayabusa eventually reached its target — the loosely bound asteroid Itokawa — in late 2005. Hayabusa was equipped with a miniature lander meant to hop along the surface of the asteroid. But, in another faux pas, the lander was unceremoniously lost into space shortly after its deployment. Fortunately, Japan's space agency, JAXA, still managed to touch down on asteroid Itokawa with the main Hayabusa spacecraft, which kicked up teeny dust grains that it collected and stored for its return to Earth. On June 13, 2010, Hayabusa earned its name ("peregrine falcon") by dive-bombing through Earth's atmosphere at 7.5 miles (12.2 kilometers) per second. As expected, the vast majority of the spacecraft disintegrated upon reentry; however, the heat-shielded sample-return capsule survived the fall relatively unscathed, providing researchers with unparalleled access to the surface of an asteroid for the very first time.

Piecing Together The Past

Now, after over a decade of closely examining the tiny pieces of dust returned by the Hayabusa spacecraft, a new study published in Scientific Reports claims to have finally pinned down the origins of mysterious asteroid Itokawa.

This close-up image shows a microscope dust grain from Itokawa collected by Japan's Hayabusa spacecraft, which was the world's first mission to collect samples from the surface of an asteroid and return them to Earth for further study. (Credit: ESA) By studying the asteroid's ancient dust grains, scientists have learned that the primeval pile of rubble was formed some 4.6 billion years ago, right around the time the solar system was born. However, unlike some asteroids, Itokawa has apparently had an eventful life since then. According to the study, about 1.5 billion years ago, a run-in with another asteroid nearly obliterated Itokawa, but the remains eventually recongealed into the more familiar shape we see today. Furthermore, the researchers say Itokawa spent most of its life (and death and subsequent rebirth) in the asteroid belt, only being kicked out in the past couple hundred thousand years. And since non-asteroid-belt asteroids don't tend to fair well in independent orbits, the researchers predict Itokawa will either break apart or collide with Earth within the next million years. This unsettling conclusion is largely based on a previous study that simulated 39 nearly identical orbits for asteroid Itokawa. According to the study, "the results indicate that an Earth impact of [Itokawa] is likely within a million years." Though this may seem ominous, on average, an Itokawa-sized asteroid strikes Earth about once every 250,000 years. This is like comparing the odds of getting punched by a particular person to the odds of getting punched by any person. Even though the risk of getting hit by any asteroid is higher, we would be wise to still keep an eye on Itokawa.

This illustration from the new study shows the time evolution of asteroid Itokawa, which is assembled using data from multiple studies.(Credit: K. Terada et al.)

Hayabusa collected over a thousand miniscule dust grains from Itokawa before returning them to Earth. But these grains are valuable to countless researchers, so they are often separated and shipped to labs all over the world. By focusing on just a few available microscopic phosphate minerals — which are rare in Itokawa particles — the authors of the new study measured how much uranium within the phosphate had decayed into lead. Since uranium decays at a known rate, this allowed the researchers to estimate the age of the asteroid, concluding it is 4.64 billion years old, give or take 180 million years. And by analyzing different uranium and lead isotopes, which have varying decay rates, the researchers also figured out that asteroid Itokawa had a catastrophic impact with another object about 1.51 billion years ago. However, the authors note the timing of this event is much less certain. It could have happened as recently as 660 million years ago, or as long as 2.36 billion years ago.

Although the first Hayabusa mission was plagued with problems, that didn’t stop JAXA from quickly planning a second asteroid-return mission, Hayabusa2. Launched in late 2014, this spacecraft recently sidled up next to the asteroid Ryugu, where it will spend a year and a half surveying the half-mile-wide asteroid. Like the original Hayabusa mission, H2 also aims to return an asteroid sample to Earth. Similarly, NASA's OSIRIS-REx spacecraft is about to rendezvous with the 1,600-foot-long asteroid Bennu, which NASA classifies as "potentially hazardous" to Earth. After spending about a year and a half surveying and collecting data on Bennu, OSIRIS-REx will select and collect samples from a yet-to-be determined location in July 2020, before returning them safely to Earth for further study. As Hayabusa showed, even mildly successful asteroid return missions can result in fascinating discoveries. With Hayabusa2 and OSIRIS-REx already underway, researchers will hopefully have a wealth of material to analyze in just a few short years, helping them piece together the complicated history of these cosmic bocce balls. And by better understanding how asteroids form and interact within the asteroid belt, we may just be able to avoid a scenario where Bruce Willis is our best chance of survival. [This article originally appeared on Astronomy.com]