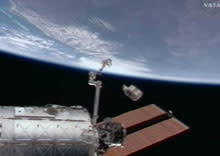 A redundant piece of the International Space Station's cooling system that was chucked overboard more than a year ago finally reached the earth's atmosphere this weekend. NASA expected the 1,400-pound piece of space junk to break apart and partially burn up in the intense heat of reentry, but warned that up to 15 pieces of the object could hit the earth's surface.

NASA exploding-space-fridge experts have worked out that the largest pieces of tank which could survive might be as big as [40 pounds] and travelling at 100 mph.... "If anybody found a piece of anything on the ground Monday morning, I would hope they wouldn't get too close to it" [The Register]

Suffredini said that while astronauts have accidentally lost a tool or two during spacewalks, the planned jettison of larger items is done with the utmost care to ensure the trash doesn't hit the station or any other spacecraft as it circles the Earth. Engineers also make sure the risk to people on Earth is low, as well. "As a matter of course, we don't throw things overboard haphazardly," Suffredini said. "We have a policy that has certain criteria we have to meet before you can throw something overboard" [SPACE.com].

The object, named the Early Ammonia Servicer, is a coolant tank that was used to backup the space station's cooling system in the event of leaks, but recent upgrades to the station made the part obsolete. The space station managers decided against sending the tank back to earth on a shuttle flight because they were worried about the structural integrity of the tank, which still held toxic ammonia coolant.

The largest piece of orbital trash ever tossed overboard, the Early Ammonia Servicer coolant tank was discarded by NASA astronaut Clayton Anderson during a July 23, 2007 spacewalk. An unneeded 212-pound video camera stand was jettisoned at the same time, burning up harmlessly in its descent through the atmosphere earlier this year, Suffredini said [Aero-News Network].

Since it was jettisoned, the orbiting tank has been slowly losing speed due to friction in the extreme upper atmosphere, causing it to gradually sink closer to earth. Related Content: 80beats: Repair Mission to the Hubble May Encounter Perilous Space Debris DISCOVER: Map: Space Junk DISCOVER: Watch the Skies--For Junk, an interview with the head of NASA's orbital debris office Image: NASA