Space Laundry, and the Quest for Odor-Free Underwear 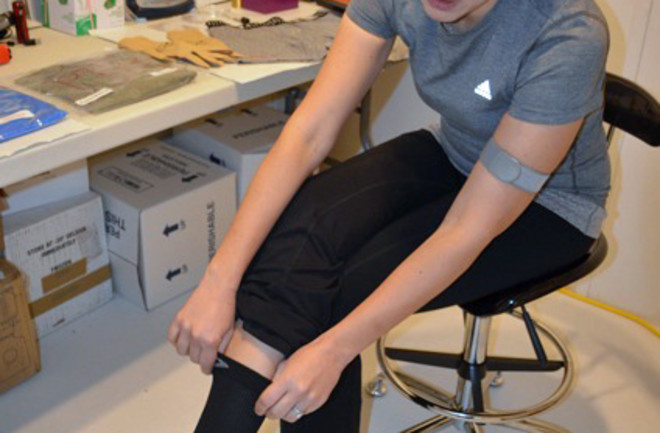 Crew Scientist Yajaira Sierra-Sastre tries on a pair of Cupron socks. Their fabric has copper oxide particles incorporated into the threads to kill odor-causing bacteria and fungi. Credit: Sian Proctor

This is the eleventh in a series of reports from the HI-SEAS simulated Mars mission. Read others in the series here.

Astronauts’ dirty laundry could be a big problem on a Mars mission. Here on Earth, we take clean clothes for granted, but on an interplanetary ship, a traditional washer and dryer would be impractical. And it’s simply too bulky, expensive, and wasteful to blast up many years’ worth of disposable clothes for a long-haul voyage. So what’s a Mars explorer to do? The approach taken on the International Space Station won’t help, unfortunately. Currently, astronauts go about a week or so without changing their drawers. Don’t worry. It’s likely not as bad as it sounds. Because the ISS is a controlled, relatively clean environment and fabrics hang looser on the body in microgravity, clothes don’t get dirty as quickly up there as they do on Earth. Still, there are no laundry facilities on the space station. Soiled clothes get ditched.

There is hope, however, for a space-based washing machine. In 2011, NASA funded a project by UMPQUA Research Company to refine a low-power, low-water device that could wash and dry clothes on long-term space missions. According to the company’s website, the prototype has been built and tested successfully in a microgravity simulation flight. Another option to keep the stink away is to give astronauts garments treated with antimicrobial agents. In an experiment in 2009, Japanese astronaut Koichi Wakata tested bacteria-resistant garments, wearing a pair of treated underwear for about a month with, reportedly, no malodorous effects. NASA has recently begun to explore the possibilities of similar antimicrobial textiles for its astronaut corps. And that’s where HI-SEAS comes in. We stay mostly within the walls of a domed habitat, a relatively controlled and clean environment. We maintain hygiene and exercise habits similar to those of astronauts. And while we use a traditional washing machine, our loads are necessarily small and infrequent due to water constraints. These factors make us ideally suited to put antimicrobial textiles to the test.

There are two basic ways to enable textiles to kill microbes. The first is to coat the fabric in a liquid solution that contains metals like silver ions; metal oxides like copper oxide; or compounds of ammonium. The other way is to impregnate the threads themselves with these kind of antimicrobial agents. At HI-SEAS, we’re testing both approaches. Our science officer, Yajaira Sierra-Sastre, is a materials scientist with background in nanotechnology to keep bacteria, fungi, and other microorganisms at bay. Prior to the start our simulated Mars mission, she formed collaborations with textile researchers at NASA and at Richmond, VA-based Cupron. Both organizations were willing to provide garments and other textiles for the crew to test during our four months in isolation. In addition, Yajaira's collaborator Christopher Carr, researcher at MIT, will provide DNA analysis of the fabrics post-mission to identify precisely the creatures with which we've lived in such close proximity.

Soon after arriving on Mars last April, Yajaira distributed the goods. From NASA we received eight exercise shirts and four pajama tops each. We weren’t sure exactly how each exercise shirt had been given its antimicrobial powers or if it had any at all, although based on the project description, it's likely some of them were dipped in an antimicrobial solution. Our main objectives were to wear them and fill out surveys, noting their appearance, feel, and odor, among other things. A few weeks ago, I retired my last NASA workout shirt, having gone through all eight. Amazingly, some crew members are still on their first ones. It’s a randomized study, and we won’t know who got which shirts, but it’s a safe bet that some were endowed with highly effective antimicrobial treatments. As for the pajama tops, I liked one in particular and wore it for about a month. While its odor never exactly offended, I did notice how over time it felt different, heavier. Evidently, the cumulative weight of weeks worth of dead skin cells was becoming apparent. I could not abide it, and therefore moved on to other pajamas.

Yajaira Sierra-Sastre tests samples from a new Cupron pillowcase for microbial life including aerobic bacteria, Staphylococcus aureus, mold, and yeast. Credit: Sian Proctor From Cupron, the crew received bedsheets, pillowcases, towels, socks, glove liners (to be worn inside our mock spacesuit gloves), and undershirts and underwear. All of these were made of threads embedded with non-toxic copper oxide particles. The particles release ions that damage the bacteria and fungi cells. (Or so it’s thought. While the antimicrobial and anti-fungal properties of copper are well-documented, the mechanism for killing bacteria and fungi isn’t yet clear.) With these Cupron products---all are commercially available except the undershirt and underwear---Yajaira has been leading field tests to see how well the textiles hold up in an environment of low hygiene and limited water use, as it would be on a Mars mission. I can say I’ve been using my sheets and pillowcase from the beginning with no issue. The gloves are used from time to time and have remained odor-free, even after long, sweaty excursions in our spacesuit simulators. The towels were placed communally, and early analysis indicates that even after weeks of use in the bathrooms and kitchen, they harbor barely any of the usual suspects such as Staph. aureus, mold, and coliforms. We're starting the sock study this week---testing a pair, one sock treated and one sock not, for two weeks. But the prototype tank top and underwear turned out, unfortunately, to be extremely uncomfortable to me, so I gave up on them after only a day. Evidently, I’m no Wakata. Which brings me to one of the more tricky aspects of this type of research, and the reason surveys are as important as coliform counts. Even if an article of clothing can eliminate most odor-producing microbes, qualitative factors like comfort, fit, style, and perception of safety and cleanliness must be considered. It’s not just the antimicrobial properties that will be important to designing an ideal garment: It’s whether people will actually want to wear it for months on end. With luck and more studies like the ones Yajaira’s conducting, future astronauts won’t need to suffer dirty socks and underwear for the sake of exploration. And maybe some of these tricks could help the good people of Spaceship Earth reduce their laundry loads as well.