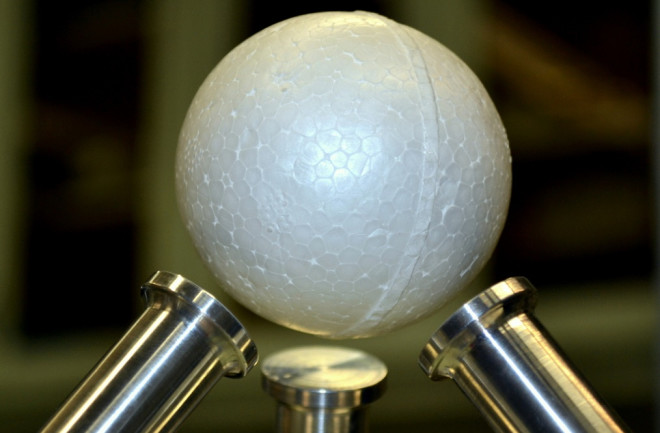 Acoustic levitation conjures images of Star Trek­-style tractor beams and ultrasonic hover boards, but in reality floating objects on a cushion of sound occurs on far smaller scales. That’s in part due to one challenge: objects typically won’t float if they’re larger than the sound wave used to lift them.

Marco Andrade and Julio Adamowski at the University of São Paulo in Brazil, along with Anne Bernassau at Heriot-Watt University in the United Kingdom, proved it’s possible to surmount this limitation. In an experiment that looks cooler than it sounds, they levitated a polystyrene sphere that was 3.6 times larger than the 14-millimeter ultrasonic wave used to lift it.

Acoustic levitation isn’t new; scientists have used sound to suspend small spheres and water droplets in midair for years. Traditionally, acoustic levitation involves blasting identical sound waves from two sources—top and bottom—to create a standing wave. The wave oscillates between peaks of high and low pressure, but there’s a pocket in the middle of the wave where the pressure doesn’t change at all. That’s where lightweight objects can float.

Instead of using two sources to generate sounds, Andrade’s team used three ultrasonic transducers, arranged in a tripod formation. The setup created a standing wave between the sphere and transducers, which elevated the object while keeping it in place.

This isn’t the first time scientists have acoustically levitated an object larger than its supporting wave. A team from the University of Hannover in 2009 lifted a compact disc the traditional way — it floated in that standing wave sweet spot— but a central pin was needed to keep it from moving sideways. The tripod arrangement solved this problem, and Andrade and company published their findings recently in Applied Physics Letters.

Currently, the tripod system can only lift objects and hold them in a fixed position, but researchers think they can build on their design to levitate objects of various shapes and sizes higher in the air, and move them in multiple directions. A British research team has already used “sound holograms” to manipulate small spheres in an entirely different take on ultrasonic levitation.

In the shorter term, the uses for acoustic levitation devices aren’t as sexy as, say, a tractor beam. However, they could be used to handle and study extremely hot or caustic liquids, or help contain liquids in space.