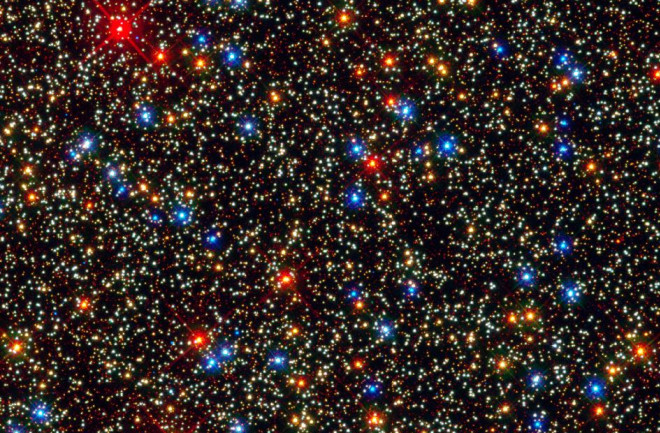 A close-up of Omega Centauri’s core shows some of the 10 million stars that lie within its borders. (Credit: NASA, ESA, and the Hubble SM4 ERO Team) Well, it looks like we’re going to have to look farther than we thought for intergalactic extraterrestrial life. Astronomers have long held out hope that Omega Centauri, a massive globular cluster just 16,000 light years away, harbors habitable exoplanets. Researchers estimate that 10 million densely packed stars lie within the cluster’s borders, so statistically speaking, it must house some habitable planets, right? Wrong. In fact, Omega Centauri’s stellar density is the reason why some scientists now suspect life doesn’t exist on any of its planets. A study submitted to The Astrophysical Journal on July 31 highlights prominent exoplanet hunter, Stephen Kane, and his search for habitability in this compact sea of stars. But even though it's the largest globular cluster in the Milky Way and relatively nearby, surprisingly little is known about its planetary population. “Despite the large number of stars concentrated in Omega Centauri’s core, the prevalence of exoplanets remains somewhat unknown,” said Kane, who teaches planetary astrophysics at the University of California, Riverside. “However, since this type of compact star cluster exists across the universe, it is an intriguing place to look for habitability.” Kane, along with San Francisco State graduate student Sarah Deveny, used data from the Hubble Space Telescope to study 350,000 red dwarfs in the center of Omega Centauri. These stars are around the right age and temperature for exoplanets to exist within their habitable zones — the region where liquid water can be sustained on a planet’s surface. Too Close For Comfort The duo calculated the habitable zone for each of these stars and found that, like the cluster itself, it’s a pretty tight squeeze. Due to the small and dim nature of red dwarfs, they give off little light and have habitable zones that only stretch about 46 million miles (74 million kilometers) from their surfaces. That's just half the size of habitable zones surrounding stars like the Sun. The short distance between red dwarfs and their potentially habitable planets isn’t an issue, but their proximity to other red dwarfs is. In the core of Omega Centuari, only about 0.16 light years lie between each red dwarf. For comparison, the closest star to our Sun is Alpha Centauri, which sits a good 4.22 light years away. Since the stars are so compact, their gravitational forces end up interacting with one another, and consequently knocking each other’s planets out of orbit. The researchers estimate that these stars disrupt each other once every 1 million years or so, which doesn’t give their planets enough time to form and sustain life. “The rate at which stars gravitationally interact with each other would be too high to harbor stable habitable planets,” said Deveny, who co-authored the paper, in a news release. “Looking at clusters with similar or higher encounter rates to Omega Centauri’s could lead to the same conclusion. So, studying globular clusters with lower encounter rates might lead to a higher probability of finding stable habitable planets.” Astronomers might feel let down by the once promising Omega Centauri, but luckily, there are a whole slew of other globular clusters hanging around our galaxy.