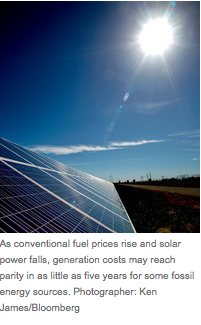 For a while, I've been hearing that the cost of renewables will soon be equal to that of traditional fuels, with solar leading the way. Meanwhile, renewable prices have continued to decrease while oil, coal, and nuclear have risen consistently. So it's interesting to see this article at Bloomberg:

The cost of generating power by capturing the sun’s energy will fall about 10 percent a year in the next decade until it equals the expense of producing electricity by burning fossil fuels, a BP Plc official said. As conventional fuel prices rise and solar power falls, generation costs may reach parity in as little as five years for some fossil energy sources, Vahid Fotuhi, Middle East director of BP Solar, said at a conference in Abu Dhabi yesterday. Solar power costs about 20 cents a kilowatt-hour now, he said. * * * * Solar power expenses are declining as technology improves, the speakers said. Fossil fuel costs may climb with oil prices that are expected to rise to an average of $94.50 a barrel in 2012 and to $102.13 a barrel in 2013, according to the weighted average of estimates from 35 analysts compiled by Bloomberg.

Neat, no? Read the full article at here.