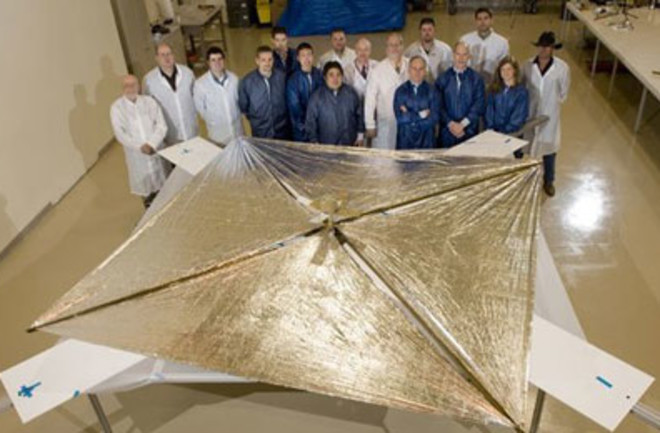 When the private space company SpaceX launches its Falcon 1 rocket at the end of July, it will bring an intriguing experiment into orbit: a small NASA satellite that could be maneuvered through space with an attached "solar sail." The sail would be powered by photons from the sun hitting the reflective surface, a series of tiny impacts that can provide a boost in the frictionless void of space. In a video, NASA scientists show off a satellite about the size and shape of a shoebox with four masts that spring out to support the sail, which measures 100 square feet when unfurled. If the sail is successfully deployed, NASA will experiment with using the sail to control the satellite's altitude and orbital maneuvering. To understand this technology's potential, consider that

it took the Voyager probes 30 years to get to the edge of the solar system where they are still hurtling outward further every day. Although slower to get started, a solar sail could catch up with a Voyager spacecraft in a single decade [Wired News].

This isn't the first attempt to deploy solar sail technology, but the few previous attempts have failed. In 2005, The Planetary Society launched a solar sail spacecraft, hoping to be the first successful launch. However, later that day, there was no confirmation that the craft, names Cosmos 1, had entered orbit, and the mission was deemed unsuccessful

Solar sails caught the attention of science fiction writers decades before space agencies were ready to try them out.

As Arthur C. Clarke's wrote in his 1964 short story Sunjammer: "Hold your hands out to the sun. What do you feel? Heat, of course. But there's pressure as well — though you've never noticed it, because it's so tiny. Over the area of your hands, it only comes to about a millionth of an ounce. But out in space, even a pressure as small as that can be important — for it's acting all the time, hour after hour, day after day" [SPACE.com].