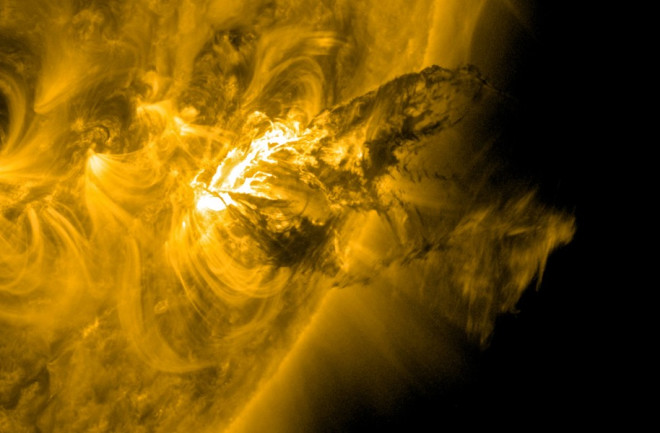 A closeup of a gargantuan eruption of plasma on the sun's surface on June 7 was captured by NASA's Solar Dynamics Observatory. Click on the image for a larger version. And check out the text and additional images below to learn what happened when the stuff splattered back down onto the sun's surface. (Image: NASA / SDO / P. Testa-CfA) On June 7, the sun belched and made a mess — to the great delight of astronomers. The gargantuan eruption blasted billions of tons of plasma burning at 18,000 degrees F into space. It's the dark filamentous stuff blasting out from the sun's lower right quadrant in the closeup image above, captured by NASA's Solar Dynamics Observatory. And when some of it landed back on the sun's surface, the resulting splatter gave astronomers insights that may help them gain a better understanding of how stars form. Check out this animation of SDO images of the entire event — make sure to click on the still image to go to the movie:

Plasma erupts from the lower right quadrant of the sun's surface and splashes back down. Click on the image for a movie of the event. (Animation: NASA / SDO / P. Testa-CfA) When blobs of plasma fell back down onto the sun's surface at a velocity of 900,000 miles per hour, they heated up to nearly 2 million degrees F, creating hot spots that glowed in the ultraviolet portion of the electromagnetic spectrum, according to the Harvard-Smithsonian Center for Astrophysics, which designed a key SDO instrument. Here's another movie of the event, this one in super-closeup — and as before, click on the image to watch the animation:

A super closeup animation of the event shows blobs of plasma falling to the sun's surface. Click on the still image to watch the movie. (Animation: NASA / SDO / P. Testa—CfA) Visually, all of this action is compelling enough. But the pictures also reveal new detail about what happens when material falls onto a star's surface. That's important because a star like our sun forms by accreting material from a giant disk of dust and gas that surrounds it in the early stages of its life. Astronomers have been able to observe star formation and evolution using the Hubble Space Telescope and other instruments. Those observations combined with computer modeling have given them a pretty good idea how the process works. But the devil is always in the details. Among those details: What materials accrete to an infant star as it is growing, and how fast does it happen? Ongoing observations of our own star, the sun — and specifically what happens when material falls onto it — are helping astronomers answer those questions. "We often study young stars to learn about our Sun when it was an 'infant,'" says Harvard-Smithsonian Center for Astrophysics astronomer Paola Testa (quoted in a CfA press release today). "We’re doing the reverse and studying our Sun to better understand distant stars."