So, How Long Would It Take to Travel to That Exciting New Exoplanet? 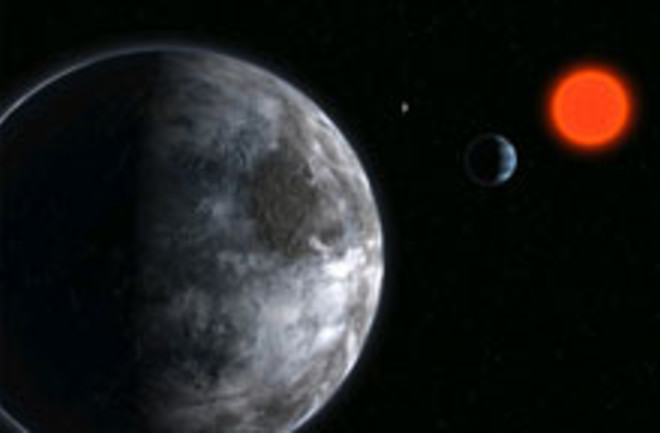 Last week, the astronomy world lit up with the report of a newly identified exoplanet that may be orbiting in the “habitable zone” around its star. As DISCOVER’s Bad Astronomer explained, the planet orbits a dim red dwarf star called Gliese 581, and seems to be at the right distance from the star to maintain liquid water on its surface. That, of course, makes alien-philes wonder if Gliese 581g also hosts life. And that makes people want to go check.

But the media enthusiasm may have gotten ever so slightly ahead of the science.

Announcing the find on NBC Nightly News, Brian Williams said: “They say it’s about 20 light years away, but that’s practically nothing in astronomy terms.” And he declared at the end of the segment: “It’s just nice to know that if we screw this place up badly enough there is some place we can all go.”

That really pissed off David McConville, a space and science educator with the company Elumenati. McConville worries that such flippancy discourages conservation programs here on Earth, and he did the math to show that Gliese 581g is a little more than a hop, skip, and jump away. Here’s his explanation, in cute avatar form:

So, McConville puts the trip at about 180,000 years. Bummer. But that’s assuming that humans only have access to current technology.

Dave Goldberg, coauthor of A User’s Guide to the Universe, took a more optimistic approach. In a blog post, he assumed an average travel speed of 92 percent of the speed of light, and figured that the trip could be accomplished in 22.4 years of Earth-time. Better yet, the time dilation effect described in Einstein’s theory of relativity would shorten the trip from the perspective of the bold travelers on their way to Gliese 581g. To them, the trip would only seem to take 6.1 years.

Goldberg is assuming that humans will figure out how to build a matter-antimatter drive like the one described in a DISCOVER article some years back: Hydrogen and anti-hydrogen would mix in a combustion chamber, converting matter into energy at 100 percent efficiency. But Goldberg notesthat there’s still a catch.

To do the trip above requires (at least) 530 times as much mass in fuel as in the ship and cargo itself.

That is very bad news.  Let’s put things in perspective and imagine sending the international space station (m= 370 metric tons) to Gliese 581g.  The whole trip would require something like:

Or approximately 5% of the sun’s energy output in a second.  That sounds reasonable, until you realize that that tiny amount would take approximately:

That, as the physicists say, is non-trivial.