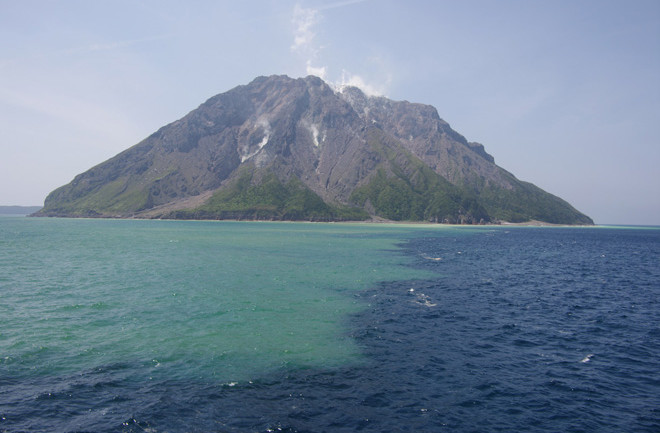 The Tokara-Iwo-Jima (Satsuma Iojima) rhyolite dome seen on April 12, 2012. Steam can clearly be seen coming from the dome. Image: tsuda / Flickr. A small eruption might be underway at Satsuma-Iojima, part of the Kikae caldera, off the southern coast of Kyushu in Japan. The island volcano was reported to have a thin plume that reached 8 km (27,000 feet)*, but beyond this, details are scant. The Japanese Meteorological Agency raised the alert status at Satsuma-Iojima to Level 2, which means to not approach the crater. I took a look at today's Aqua and Terra images and sure enough, the Aqua/MODIS images, you can see a thin plume drifting off to the west (see below) -- nothing too impressive, but still, clear signs of new activity at Satsuma-Iojima. The last eruption from the Kikae caldera area was back in 2004, when it produced a similar small plume. Between 2000-2004, the volcano produced a few VEI 2 eruptions, mainly from a rhyolite dome at Tokara-Iwo-jima (another name for Satsuma-Iojima; see above). There is evidence that pyroclastic flows from Kikai travelled 100 km over the ocean to reach the southern shores of Kyushu -- and that would require a large eruption, such as the VEI 7 eruption that occurred in ~4350 B.C.E. This eruption from Kikai likely caused significant changes in vegetation on Kyushu after wiping out whole forests on the nearby island.

Aqua/MODIS image of the small plume from Satsuma-Iojima seen on June 4, 2013. Image: NASA. * I tend to take VAAC plume heights, especially in cases without a lot of direct observations, with a grain of salt. {Special thanks to James Reynolds for bringing this to my attention.}