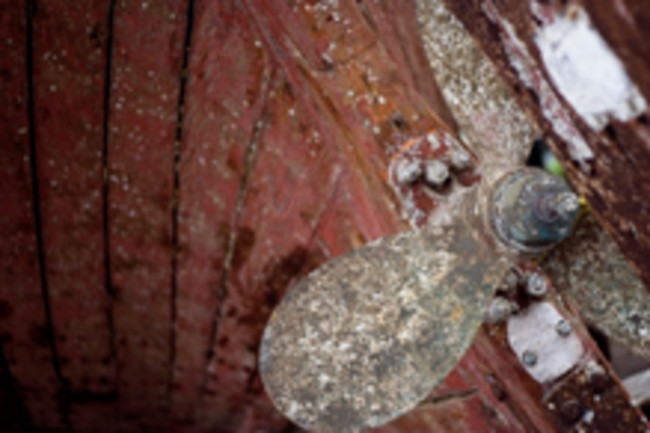 One day, the most advanced ships may not have steel hulls that slice cleanly through the water, but instead may sort of ooze along, leaving a wake of slime and microbes. Researchers are trying to design a ship that continuously exudes slime to form a coating around its hull that steadily wears away, taking hangers-on like barnacles with it. Barnacles and the other sea creatures that accumulate on boats' undersides create drag, and therefore reduce speed and energy-efficiency. The problem is an expensive one,

as it requires vessels to be brought into dry dock every couple of years to remove plants and animals from the hull. It has been made worse by the banning last year of antifouling paints based on tributyltin, which is toxic to marine life [New Scientist].

In the study, published in the journal Smart Materials and Structures, lead researcher Rahul Ganguli describes the scheme.

His idea is to cover the outer layer of a ship in a metal mesh, beneath which is a regular pattern of holes that exude a sticky, biosafe chemical that becomes more viscous on contact with seawater. As the secretion oozes out of the pores it fills the gaps in the mesh and pools on top to form a viscous skin coating the entire hull. This skin steadily wears away, taking with it any life that has gained a foothold, and is replaced by new slime from below [New Scientist].

When Ganguli tested the system in tanks of water in the lab, he found that the viscous coating greatly reduced the amount of bacterial colonies growing on the ship; these colonies form the base on which barnacles, sea weeds, and tube worms take hold and grow. Testing of the materials will continue, underwritten by the U.S. Department of Defense. Related Content: 80beats: When Arctic Sea Ice Melts, Shippers Win and Walruses Lose 80beats: Ships Set Sail to Examine the Vast Patch of Plastic in the Pacific OceanImage: iStockphoto