Earth's outpost in space gets quite an upgrade

Our solitary human outpost in space is growing by leaps and bounds. By this fall a giant air lock will join four other modules already in place, giving the International Space Station nearly the volume of a comfortable home. When the station is completed, its bulk will double again to more than 40,000 cubic feet, about the size of a 747. The gleaming lab-in-the-sky already reflects so much sunlight that it has become the brightest "star" in the autumn heavens at nightfall. 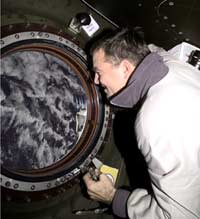 Some scientists remain unimpressed. "The International Space Station is basically a large-scale federal jobs program that has nothing to do with astronomy," says Robert Naeye, editor of Mercury magazine, echoing a sentiment many researchers share but prefer not to voice in public. These criticisms reflect researchers' frustration with the station's questionable scientific return and high cost, which they feel has robbed the research community of innumerable other projects. Advocates of space exploration, meanwhile, often deride the space station as too timid a venture. Circling above Earth's surface at a mere 1/500,000 the average distance to Mars, it is barely in space at all.

As a place to live, however, the orbiting outpost earns a glowing evaluation from astronaut Andy Thomas. Thomas, who spent four months aboard Mir in 1998 before going to the station this past March, sees no comparison between the noisy, funky-smelling Russian craft and the calm, odorless American control module. "I love working with the Russians and really liked their food, but I felt a lot safer on the ISS," he says. "On Mir, a fire created smoke that circulated for days. Even when it made us nauseated, the Russian fire officer would laugh it off as 'nothing serious.' "

In contrast with Mir, the new station has been generally trouble-free. Glitches have involved minor things like balky backup software on the new Canadarm, an all-purpose space crane, and a flawed treadmill— needed to maintain astronauts' muscle strength— whose 160 support slats fell apart and had to be replaced individually. After their workout, crews have to make do with moist towelettes, although Thomas says they're far superior to the unmanageable shower on Mir.

Astronauts are still adjusting to the psychological effects of a modular spacecraft. Following the lead of others on board, Thomas tried to stay oriented by aligning his floating body with his feet toward the floor. "We'd all float the same way, although sometimes as a prank the others would hover the opposite way so when you'd come in you'd feel confused. And when you'd enter a new module whose wall was aligned with the ceiling of the one you were leaving, you'd do a double take and think, 'Which way do I turn to make the floor into the floor?' "

Like dogs riding in the family car, station astronauts never seem to tire of looking out the station's 20-inch-wide, optical-quality window. "Auroras would unfold each time we passed near the poles, thunderstorms were little silent flashbulbs going off far below, and an occasional meteor would streak through the air beneath us. Sunset lasts just five to 10 seconds. Suddenly you'd go from blindingly bright daylight to night," Thomas recalls.

The tangible benefits of the International Space Station, either scientific or commercial, are yet unseen. But it is easy to see the colossus itself. Looking up at the night's newest star, you can witness highly visible evidence of your tax dollars at work.