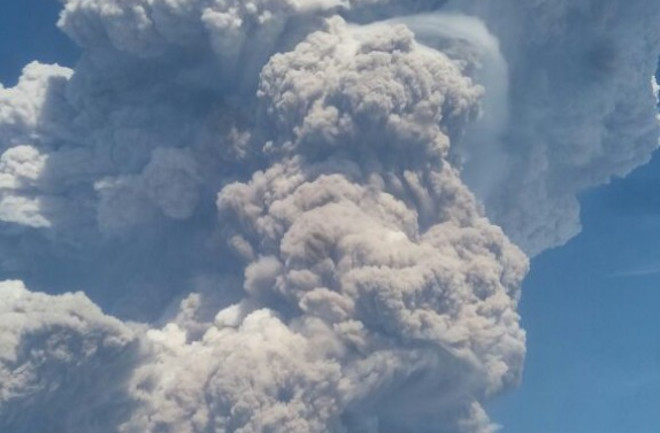 The towering ash plume from the February 19, 2018 eruption of Sinabung in Indonesia. BNPB. Sinabung has been erupting for almost 5 years now, mostly producing moderate explosions that generate pyroclastic flows. These flows roar down the slopes of the volcano -- sometimes catching people in their paths. On February 19, 2018, the volcano decided to change its tune and unleashed a massive explosion that potentially reached at least 23,000 and possibly to up 55,000 feet (~16.5 kilometers), making it the largest eruption since the volcano became active again in 2013.

Video of the eruption (above and below) show the towering subplinian ash plume in the clear blue skies. The Darwin Volcanic Ash Advisory Center report

predicts the ash will drift to the west, which luckily means the ash will fall over the Indian Ocean rather than on more of the people on Sumatra, although there has been significant ash fall

on towns near the volcano.

This great animation of Himawari-8 images shows the blast as seen from space:

The ash cloud shows all the classic signs of a large explosive eruption, with condensation on the top of the growing plume (see below) and the umbrella-shape developing as the ash reaches neutral buoyancy.

This could just be a one-off blast from the volcano and it will return to its previous level of activity, but it is startling to say the least. Sinabung is still a massive humanitarian crisis

, with tens of thousands of people unable to return to their homes for years. Some towns have even been rebuilt further from the volcano as it has shown no signs of ending this eruptive period. I will try to update as news arrives.