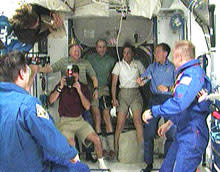 The space shuttleEndeavour docked with the International Space Station yesterday, bringing almost seven tons of supplies and a crew that's determined to give the cramped station a thorough renovation. After the hatch opened, the

astronauts floated weightlessly through a tunnel and into the welcoming arms of their colleagues aboard the $100 billion station. "We understand that this house is in need of an extreme makeover and that you are the crew to do it," station commander Mike Fincke said. "Welcome to space" [Reuters].

The Endeavour crew brought up a host of home improvements that will allow the space station to support three additional crew members: The cargo includes a second kitchen module, and extra bathroom, two sleeping cabins and exercise gear. Other new equipment will provide both creature comforts and the necessities of life: the crew will soon install

a space cooler so station astronauts can have cold drinks for the first time in the eight years astronauts have lived aboard. Endeavour is also toting a new water recycling system designed to collect astronaut urine, sweat and other wastewater into drinkable water [SPACE.com].

The water recycling system is the most critical addition to the station, as it will provide fresh water for the astronauts when NASA's space shuttles are retired in a few years and servicing missions (by Russian Soyuz spacecraft) are less frequent.

The $250 million system is designed to recycle 93 percent of the water used on the station.... [Endeavour astronaut Donald] Pettit said equipment like the water recycling system was critical to long-term space exploration, since getting new water to an outpost on the Moon or Mars would be expensive and arduous. “I really think this is a key steppingstone for human beings to leave planet Earth,” he said [The New York Times].

The shuttle launched Friday evening into a moonlit sky. NASA officials initially said that they spotted two pieces of debris falling from the shuttle during the launch, but said that neither piece hit the shuttle. However, to be certain that the Endeavor is in good condition the crew spent part of Saturday inspecting the shuttle's heat shield with a sensor-tipped inspection boom, and maneuvered the craft through a backflip as it approached the space station on Sunday to allow station crew to photograph the heat shields on its underbelly. Related Content: 80beats: Space Station Air Conditioner Plunges to Earth 80beats: NASA Considers Keeping Space Shuttles in Flight Past 2010 80beats: Astronauts Have a Toilet Again—Oh, and a $1 Billion Science Lab DISCOVER: 20 Things You Didn't Know About Living in Space Image: NASA TV