What to look for in September's night skies. 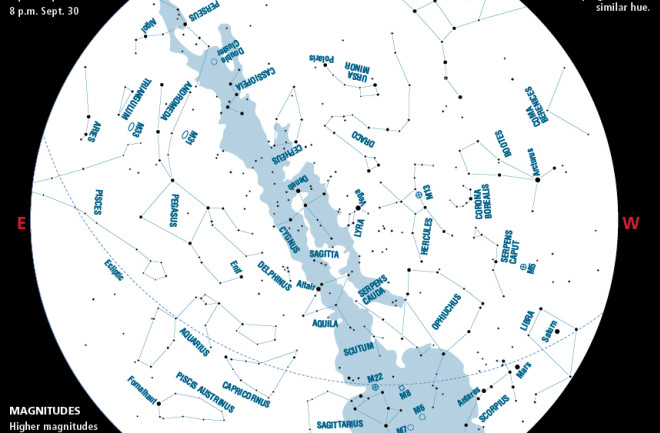 Skygazers typically view the full moon with disdain. Its bright illumination makes stars and planets appear less conspicuous to naked-eye observers, and washes out delicate details in deep-sky objects for those peering through telescopes.

But this month’s full moon, which arrives precisely at 9:38 p.m. EDT on Sept. 8, has a special charm. As the full moon closest to the Sept. 22 autumnal equinox, it also goes by the more poetic name “harvest moon.” Oddly enough, what distinguishes it from other full moons is what happens several evenings before and after.

Every night, the moon generally rises about 50 minutes later than it did the previous night. Blame it on the ecliptic, the arc of the sun across the sky, which the moon follows closely. The precise delay in moonrise depends on the angle of where the ecliptic meets the eastern horizon. The steeper the angle, the farther the moon must travel from one night to the next before it pokes above the horizon. At the autumnal equinox, however, the ecliptic meets the eastern horizon at its shallowest angle of the year, and the moon rises only some 30 to 40 minutes later each night. Hence its name: In the days before tractors had lights, the nearly full moon provided extra illumination for farmers bringing in their crops.