Shark Attacks, Phases Of The Moon And Electromagnetic Fields

Researchers investigate a link between shark attacks and lunar illumination. 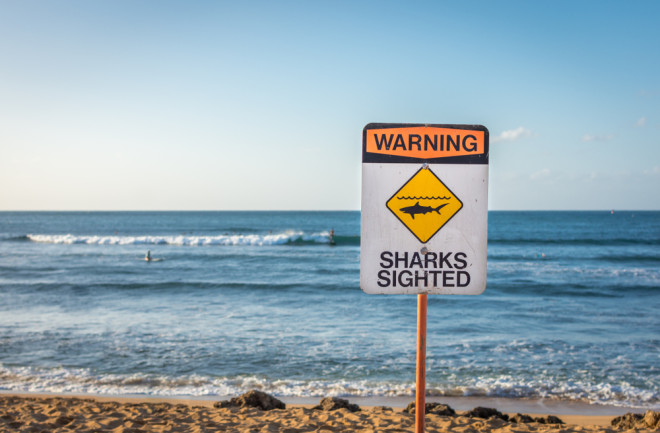 On the third Friday of December 2021, an orange-on-black LED construction sign displayed an ominous message to beach-goers in Morro Bay, California. “FATAL SHARK ATTACK,” the sign stated simply. Earlier that day, someone had spotted a large object floating in the water. The object was a man, and the man had been attacked by a great white shark while boogie boarding. He was pronounced dead at the scene.

While movies like the 1970s thriller Jaws have made shark attacks a pervasive phobia in the American collective subconscious, the truth is that they are extremely rare. Before the boogie boarder was discovered in Morro Bay, it looked like the U.S. might have a shark fatality-free year. And it wouldn’t have been an unusual occurrence — 2014, 2016 and 2017 saw no fatalities.

Of course shouting these statistics at a terrified Midwesterner who is white-knuckling a surfboard during their first trip to the ocean is not bound to help. Shark attacks are inherently scary.

“For a number of reasons, shark attacks still hold an outsized effect on us when it comes to fear,” Louisiana State University associate professor of oceanography and coastal sciences Steve Midway says. “It’s important to try to understand shark attacks so that we can minimize them and understand the conditions that increase their likelihood.”

In December, Midway and researcher Lindsay French published a paper with this goal in mind. The researchers investigated a potential link between shark attacks and the phases of the moon — a relationship that has long been theorized but never tested. Midway and French analyzed shark attack reports from the Florida Museum’s International Shark Attack File from 1970 to 2016. By drawing from such a large data set, they were able to draw an unambiguous conclusion. “We found a correlation between lunar phase and numbers of shark attacks,” Midway says. In short, more attacks occurred when the moon was more full.

Importantly, Midway notes that almost all shark attacks occur in broad daylight. It is unlikely that the extra lunar illumination itself is causing sharks to be more aggressive towards humans. Instead, the researchers hypothesize that Earth systems associated with lunar phases might be the culprit.

“We’re not hypothesizing that more light from the moon leads to shark attacks. But, while we can’t describe what the mechanism may be, we can say ‘let’s continue to look at the moon.’”

One potential cause is tides. As the Earth rotates, gravity causes our planet’s oceans to swell in the areas both closest and furthest from the nearest celestial body: the moon. While the authors recognize that tides are an obvious connection between the moon and marine ecosystems, the phenomenon is not at the top of their list of potential culprits. Tides have unique and variable effects from place to place, so it is unlikely that they would affect shark behavior in a uniform way around the world.

“Across the globe, tides vary in terms of their intensity, magnitude and the number of times that they occur throughout the day,” Midway says.

For now, the link between sharks and our moon remains an intriguing mystery. One day, though, scientists may be able to divine celestial guidance about where and when to go surfing.