Seven Books, and a Universe Worth of Perspective 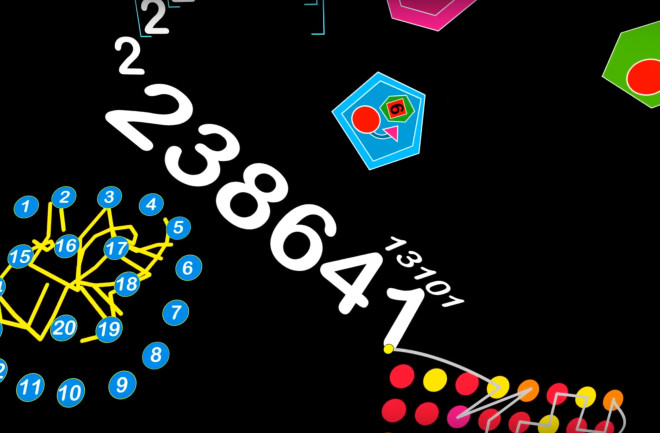 A tour into the world of Really Big Numbers. (Credit: AMS)

For years, I've toyed with doing year-end lists or holiday gift guides. Sure, they are absurdly presumptuous (are the items on this list really the best of everything in the entire world?), but they can also be useful and even inspiring. I’ve discovered a lot of good books, music, and movies by digging into these little passion products. So for the first time, I’m taking the plunge, putting together a best-of book list.

There are so many great science books out there that I’m taking a slightly unconventional approach. These are not my picks for the best books of 2019; there are already plenty of good lists like that around. Rather, these are books that caught my attention because of their ability to expand your perspective on the world, regardless of your level of scientific expertise.

Think of it as an all-ages reading list for a greater appreciation of the universe in 2020.

Gallery of the Infinite by Richard Evan Schwartz

You might reasonably guess that books written by a professor of mathematics at Brown University and published by the American Mathematical Society (AMS) would plunge really deep into the world of numbers. What you might not guess is that they are tremendous fun. And whimsical. And mostly visual: There is a fair bit of explanatory text in both of these books, but all of the pages are composed in an inviting, colorful comic-book style.

According to the AMS, these books are intended for advanced middle-school students and above, but I had no trouble getting my 10-year-old daughter hooked. She didn’t make it all the way through to some of the more advanced concepts, but that’s what re-reading (and growing up) is for. Really Big Numbers begins by looking at familiar styles of counting in unfamiliar ways, and quickly skyrockets from checkbook-level numbers to numbers that vastly exceed the quantity of particles in the visible universe (that’s about 10 to the 80th power, by my count).

After the first book has you feeling extremely small, or perhaps extremely powerful, you are ready to enter the Gallery of the Infinite. How can you not be fascinated by the idea of a number that never ends, that encompasses everything, that is beyond imagining even though it turns up in mathematics all the time? OK, even if you weren’t before, you will be after Schwartz is done with you. In his books, math is magic, imagination, logic, and Play-Doh all rolled into one.

Magnitude: The Scale of the Universe by Kimberly Arcand and Megan Watzke (Black Dog & Leventhal)

While you are going big in numbers, you can add to the fun by going big in physical dimensions, too. I've seen plenty of books that take a visual tour of the universe (and if you are reading this blog, you probably have, too), but I've never seen another book quite like this one. The authors push the concept of scale into every dimension--not just size and distance, but also scales of temperature, pressure, density, even sound. In all, they cover 13 different dimensions, in addition to a helpful primer on units.

You won't find any of the over-familiar Hubble images here, either. The book is entirely illustrated by Katie Peek in a lucid, playful style. It makes the unfamiliar seem familiar, and vice versa, in a thoroughly uplifting way.

The Atom: A Visual Tour by Jack Challoner (MIT Press)

It's strange to think how thoroughly we are cut off from the essential structures of the world. Everything around us is made of atoms, and yet there is no way for us to perceive them directly. This book does a bang-up job of rectifying the situation, expanding the atomic realm into something visually and comprehensibly real. Along the way, veteran science writer Jack Challoner sneaks in a broad overview of physics, chemistry, and materials science, always connecting the theoretical concepts back to tangible examples.

Then, just when you think you know the atoms, the book leaves you with an even stranger idea to ponder: From the perspective of modern quantum theory, all particles are more accurately thought of as excitations in a field, so in a sense there is no such thing as solid matter at all.

Zooming in on DNA with Powers of Ten. (Credit: Eames Office)

Powers of Ten: About the Relative Size of Things in the Universe by Philip and Phylis Morrison, with the office Charles and Ray Eames (Scientific American Press)

No discussion of perspective would be complete without mentioning Powers of Ten, the seminal depiction of the different scales of reality. It began as a gorgeous film by Charles and Ray Eames (itself inspired by an earlier book, Cosmic View, by Kees Boeke). I remember visiting the National Air and Space Museum as a child and watching the film over and over, shivering at the vastness of the cosmos.

Today you can watch Powers of Ten online, as well as the similarly conceived, and similarly beautiful, Cosmic Zoom. Powers of Ten has also been reconceived in a slightly faster-paced, more modern-looking version as Cosmic Eye. Meanwhile, the original Powers of Ten movie begat an equally lyrical book, authored by Philip and Phyllis Morrison. It's now out of print, but readily available used at a reasonable price from all the usual online booksellers.

Astronauts: Women on the Final Frontier by Jim Ottaviani and Maris Wicks (MacMillan, coming out in February but available for pre-order)

Shifting your perspective does not always involve a change in scale or quantity. Sometimes it merely requires adjusting social preconceptions--although merely is an optimistic word, considering how difficult such adjustments tend to be. Astronauts is an illustrated history of the long struggle for women to be accepted as equals in space exploration, from Valentina Tereshkova's childhood dreams of flight to astronaut Mary Cleave's ascent to the top science position within NASA.

The graphic-novel format proves an apt way to tell a tale that balances anger and frustration with generous doses of humor and sweet triumphs. Its only real shortcoming is that the book leaves you wanting more; fortunately, it ends with a helpful bibliography and list of resources. If you enjoy this format, you might want to check out some of Jim Ottaviani's other, similarly perceptive illustrated science histories, including Hawking, Feynman, and Suspended in Language (about Niels Bohr).

The Field Guide to Citizen Science by Darlene Cavalier, Catherine Hoffman, and Caren Cooper (Workman Press, coming out in February but available for pre-order)

Perhaps the most powerful way for science to change your perception of the world is for you to do it yourself. That's the underlying theme of this friendly how-to overview of the citizen science movement. These days, it's not difficult to find a citizen science project to participate in; just Google the term and many projects pop up instantly. The harder part is knowing where to begin, and believing that your own small efforts can make a meaningful contribution to serious research project. This book can help.

The Field Guide is divided by settings rather than by field, to help you find the kind of project that suits your schedule and your lifestyle. Want to work with your community? Your school? Alone, online? Out in the field? There are options for all of these. Darlene Cavalier (who worked for Discover organizing public events) created SciStarter.org, which expands on the resources here. As with every great adventure, you just have to take the first step to get going.