A plan to send fully automated robots to survey, fix and refuel satellites could prove revolutionary to space science. 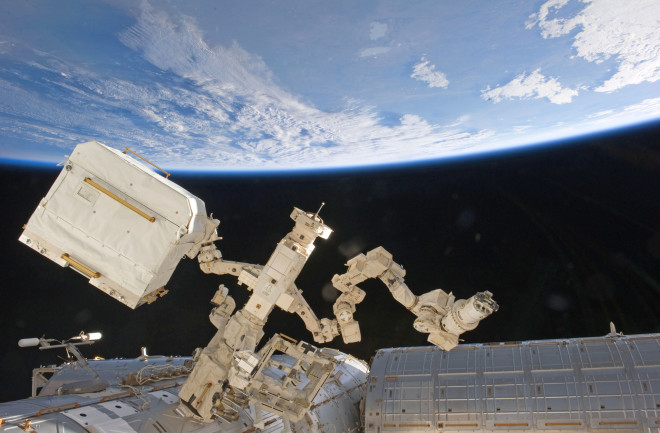 The Canadian-built Dextre, a two-armed robot aboard the International Space Station, could be a predecessor to a fleet of robots capable of repairing defunct orbiting satellites. | NASA

Earlier this year, as astronauts busied themselves inside the International Space Station, engineers on the ground conducted their own experiment just outside the craft. Operating from a control room in Houston, they directed a nearly 60-foot-long, Canadian-built robotic arm to grab a smaller, two-armed robot called Dextre, before moving it into position in front of a washing machine-size module attached to the station.

Then, Dextre reached into the module, grabbed one of four toaster-size, custom-made, high-tech tools there, and proceeded to snip two safety wires, unscrew two filler caps on the outside of the module and pump a few liters of ethanol into a small holding tank.

The Jan. 25 exercise wasn’t especially dramatic — it made no headlines. But the maneuvers, formally known as the Robotic Refueling Mission, represent what could be a revolutionary step in space science and commerce. It’s part of the larger Notional Robotic Servicing Mission (that’s Notional, not National, because so far it’s only an idea) that would send fully automated repair robots to survey, fix and refuel aging orbiters.

If it works, the project, run out of NASA’s Goddard Space Flight Center in Greenbelt, Md., could save federal and commercial satellite owners billions of dollars. A single communications satellite can generate tens of millions in revenue every year, so keeping even a few of them operating a few years longer could make a huge difference.

The decision to explore the idea is a no-brainer, says Benjamin Reed, deputy project manager of NASA’s Satellite Servicing Capabilities Office (SSCO). “Right now, there are about a thousand satellites operating in space. Of those, just two were designed to be serviced in orbit: the Hubble Space Telescope and the International Space Station,” he says. “So we began thinking about the other 998. What could be done for them?”

The “we” in this case was the team that masterminded the multiple servicing missions that refurbished and upgraded Hubble — designing the tools shuttle astronauts would use, training the spacewalkers how to use them and offering real-time guidance during the missions themselves.

“The agency hadn’t decided this yet,” says Reed, “but Frank knew we would still be servicing Hubble, so by God, let’s do it with robots instead of risking the lives of astronauts.” For the next 15 months, the team worked on the design for a robotic servicing vehicle, only to have NASA decide in the end to let astronauts carry out the fifth and final Hubble repair after all, in 2009.

Having put in the work already, Reed says the team figured, “Heck, we know how to do things robotically.” So they began thinking about those other 998 satellites. “ ‘Do they have servicing needs?’ we asked. Well, obviously they do.” Just to begin with, he says, most of the satellites carry fuel for the small rockets that nudge them back into the proper orbit when they begin to drift.

“When they run out of fuel,” says Reed, “they’re replaced.” And whether it’s the private communications satellite that carries your phone calls or a government satellite that tracks the weather, we all end up footing the bill for that replacement one way or another. With costs running into hundreds of millions of dollars for replacement satellites, and with replacements needed every 12 to 15 years, extending a satellite’s life beyond the average could result in billions in savings. Simply topping off the rocket fuel would keep many otherwise dead satellites operating for years. That’s what the January test was all about.

It wouldn’t be practical to refuel satellites in low-Earth orbit. “There are lots of them,” admits Reed, “but they’re all going in different directions. It’s tough to create a servicing mission that’s dedicated to more than one satellite.”

That makes it relatively simple for a servicing robot to flit from one satellite to the next, pumping in fuel here, replacing a battery there, pulling a stuck solar panel out to full extension, even dragging the satellite to a different spot on the orbiting belt or into a safe “graveyard” orbit if it’s beyond repair.

Unlike Hubble, however, none of the geosynchronous satellites was designed for mid-orbit maintenance, so they have no special tabs or knobs for a repair robot to grab onto. And since nobody ever expected to refuel the satellites, the fueling ports aren’t standardized. That’s why the practice module used in the January Robotic Refueling Mission test has an array of different filler caps studded along its surface.

It’s also why the SSCO has outfitted a warehouse-like structure at the edge of the Goddard campus with robot arms and mock-up satellite parts. Here, the engineers can develop the tools, techniques and software that robotic repair/refueling missions could someday use in space. The tools wielded by the Dextre robot in January came from here.

Someday, Reed, Cepollina and the other team members hope manufacturers will agree to build their satellites with orbital servicing in mind, but that clearly won’t happen until robotic repair satellites are much further developed. It’s a chicken-and-egg problem, but that doesn’t mean the manufacturers aren’t interested. The aerospace industry has already looked into what small changes it might make to future satellites.

“They don’t want something that costs a million dollars,” says Reed. “But they might be willing to use a Velcro-like closure, instead of tape, for attaching insulation around their fill-and-drain valve. That way, when a robot goes to push it back, it’s a simple peel job, it’s not a cut — and you can reattach it afterward.” Or they might slap a small patterned decal on the satellite, so that when the robot sidles up, it can tell instantly if everything’s lining up properly. “It’s a teensy bit of extra work for the manufacturer — teensy compared with the building of a $100 million satellite.”

For now, the main task is to keep practicing with the International Space Station’s module, using the various filler caps they have to work with. Then, a couple of years from now, the plate holding those caps will be taken off and replaced with two more “busy boards,” as Reed calls them, that will help develop other kinds of repair functions. Naturally, the change-out will be done robotically.

[This article originally appeared in print as "Save our Satellites."]