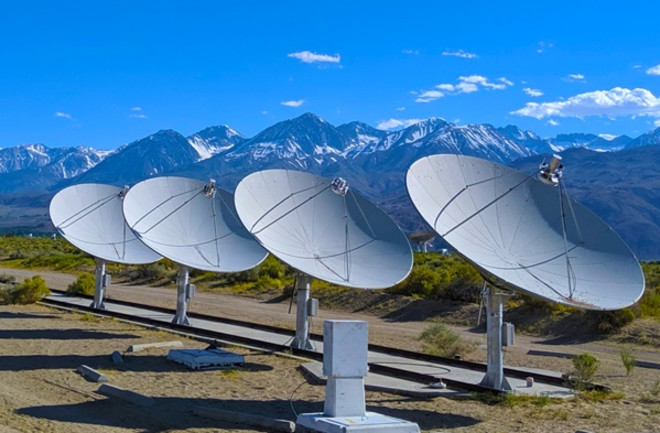 The Deep Synoptic Array-10, which spotted the burst, is located at the Owens Valley Radio Observatory. (Credit: Caltech/OVRO/Gregg Hallinan)

Fast radio bursts, or FRBs, are one of astronomy’s hottest topics — and biggest mysteries. These brief bursts of radio waves from outside the Milky Way typically pop off for only a fraction of a second, then disappear forever, never to be seen again. Only two FRBs have ever been caught repeating, one of which astronomers traced back to its home galaxy in 2017. Last week, researchers reported they had, for the first time, traced a one-and-done, non-repeating FRB back to its home — the second FRB ever to be tailed to its source.

The new, non-repeating FRB is called FRB 190523. Astronomers led by Vikram Ravi of the Cahill Center for Astronomy and Astrophysics in Pasadena, California, and the Center for Astrophysics in Cambridge, Massachusetts, spotted the burst May 23, 2019, using the Deep Synoptic Array-10’s (DSA-10) ten 4.5-meter radio dishes. The burst did not repeat, they say, despite the fact that they watched it for a total of 78 hours spread out over the course of 54 days surrounding the single detection.

Once they’d pinpointed the burst, the team hunted for a galaxy near its location. They found one: PSO J207.0643+72.4708 (PSO J207+72 for short), which they zoomed in on with the Keck 10-meter telescope in Hawaii. Based on their observations, PSO J207+72 is nothing like the tiny dwarf galaxy that is home to the only repeating FRB we’ve ever pinpointed (FRB 121102). Instead, FRB 190523’s galaxy is more like the Milky Way: It contains about a trillion solar masses and is forming stars at a low rate, less than two Suns’ worth per year. That’s in sharp contrast to the repeater’s home, which is not only a thousand times less massive, but also forming stars at a much higher rate.

Those differences are important, because they suggest two things. One: Galaxies like the Milky Way can host whatever it is that’s creating the FRBs. A galaxy doesn’t need to be forming stars rapidly to do it. And two: If the galaxies hosting FRBs are different, there may be more than one type of object causing FRBs, or maybe astronomers’ original theories about their origins are wrong.

The current prevailing theory is that FRBs are outbursts that occur on magnetars, which are a type of highly magnetized, rapidly spinning neutron star. (Neutron stars are often what’s left over when a massive star reaches the end of its life and explodes.) In a galaxy that’s forming many stars rapidly, those stars will also die often, setting up a system where many magnetars could exist and generate FRBs. So, the host galaxy of the repeating FRB 121102 makes sense. But galaxies like the Milky Way and FRB 190523’s home aren’t like that — they’re forming stars much more sedately, so magnetars aren’t as common.

“The theory that FRBs come from magnetars was developed in part because the earlier FRB 121102 came from an active star-forming environment, where young magnetars can be formed in the supernovae of massive stars. But the host galaxy of FRB 190523 is more mellow in comparison,” Ravi said in a press release.

How does FRB 190523 stack up against the other non-repeater, FRB 180924? Their homes look much more similar. Announced last week, FRB 180924 occurred in a galaxy called DES J214425.25−405400.81. That galaxy is 4 billion light-years away and about the mass of the Milky Way, and also forming stars at about the same rate. So, the galaxies that host the non-repeaters are pretty alike, and much more like the Milky Way than either is to the tiny home of the repeater. That’s also interesting, and lends some credence to the idea that maybe more than one factor is at play when it comes to making FRBs.

Tracking an FRB back to its home galaxy is challenging — it requires instruments with high precision to decisively show which galaxy a burst might be coming from. And because they’re one-and-done, non-repeating FRBs are harder to trace than those that repeat. But there are many more non-repeating FRBs known — about 80 —  than repeating FRBs, of which there are only two. So, tracking non-repeaters may be harder, but it could become easier with the right instruments as more and more are found.

Arrays like the full Deep Synoptic Array, which will ultimately use 10 times as many dishes as the DSA-10, and others are hoping to spot and eventually trace hundreds of FRBs per year, according to Richard Barvainis, program director of the National Science Foundation program funding the Deep Synoptic Array’s construction.

As more and better radio instruments come online, astronomers are hopeful they’ll be able to spot — and track — more repeating and non-repeating FRBs to their sources, and hopefully unravel the mystery of what’s causing these cosmic flashes, and whether more than one culprit could be to blame.