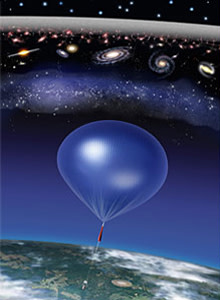 The sound of scientific discovery isn't the clichéd "Eureka!" It's much more like this recent exclamation from NASA astrophysicist Alan Kogut:

“What the heck is this?” Dr. Kogut remembered exclaiming when he first saw the data. “This shouldn’t be here” [The New York Times].

Kogut was looking at a measurement of cosmic radio signals detected by sensitive antennas borne aloft in a balloon, which floated 21 miles above Texas for several hours. While scanning the sky, the instruments found

a booming, uniformly distributed radio noise six times louder than anyone had predicted.... The researchers calculate that the radio noise is much too large to be accounted for by the combined emissions of all the galaxies in the universe that emit radio waves [Science News].

When researchers started to contemplate where that signal may have come from, things began to get interesting. It's possible, says Kogut, that the radio waves may have been emitted during the death of the universe's first stars. Those stellar pioneers

were brutish monsters, so the story believed by most astronomers goes, lumbering clouds of hydrogen and helium hundreds of times more massive than the Sun. They lived fast and bright and died hard, exploding or collapsing into massive black holes less than a billion years after the Big Bang, never to be seen again [The New York Times].

When they collapsed into black holes, they may have spewed forth jets of charged particles that emitted these radio waves. The balloon that went aloft is called the ARCADE project, which is itself a marvel of engineering. The radio receivers were cooled to a temperature of just 2.7 degrees Kelvin above absolute zero (-459.6 degrees Fahrenheit), and they

are the first detectors capable of definitively identifying the strange radio signals, Kogut says.... Because ARCADE operates at the same low temperature as the cosmic microwave background — the whisper of radiation left over from the Big Bang that itself was accidentally discovered as radio noise — heat from the instrument can’t be confused with the radio signals it detects [Science News].

To keep the receivers at such a low temperature required

a tank of liquid helium the size of a large hot tub, Kogut said. To get such a large payload up that high required a helium balloon the size of the Astrodome [Philadelphia Inquirer].

Researchers stress that the findings, which were announced at the American Astronomical Society meeting and have also been submitted to the The Astrophysical Journal, still need to be doublechecked and verified, and say that their ideas regarding the source of the mysterious radio waves are simply informed speculation. When a proposed network of radio telescopes called the Square Kilometer Array is built in the next decade, researchers say, they may be able to probe the mystery further. In the meantime, the researchers are enjoying the mystery. Says astrophysicist Bruce Partridge:

"That's how science works.... The unexpected is interesting" [Philadelphia Inquirer].