Across much of Mars, future astronauts could simply scratch the Red Planet's surface and harvest water. 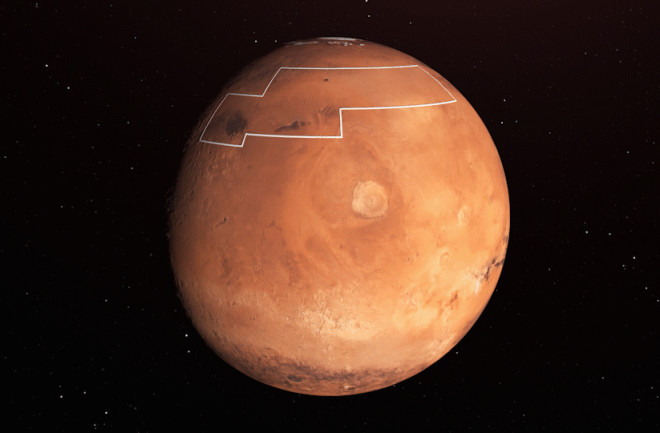 On large areas of Mars, including the region marked in this image, water ice lies just inches below the surface. (Credit: NASA/JPL-Caltech)

Future crewed missions to Mars will be easier if astronauts can use water that’s already on the Red Planet without having to bring it from Earth. Scientists know that there’s ice beneath the martian surface. But how deep underground would astronauts have to dig to get it?

A team of researchers has found that on large areas of Mars, ice is only inches below the surface and would be easy to get to. This gives planners of future Mars missions many options when deciding where on our neighboring planet astronauts should land.

The researchers present their work in a paper published Tuesday in the journal Geophysical Research Letters and in a talk on Friday at a meeting of the American Geophysical Union.

Past studies have shown that water ice lurks somewhere in the top dozen or so yards of martian soil. But beyond that, they couldn’t tell how deep the ice really is. And the exact depth of the ice makes a huge difference in how easy it will be for future astronauts to get to it for water. If it’s many yards deep, they’d need mining equipment. If it’s only a few inches, a simple shovel would do the trick.

A team of researchers led by Sylvain Piqueux of NASA’s Jet Propulsion Laboratory found a way to deduce just how deep ice must be across the entire planet by monitoring the planet’s surface temperatures across the seasons.

The researchers created a map of how deep ice is on the entire planet. They found that on large areas of Mars, ice is only a few inches below the surface.

“It’s just right there, you can scratch the surface and access it,” said Piqueux.

This map shows how deep water ice lies beneath the surface of Mars. Ice is closer to the surface in regions marked in purple and blue, and deeper below the surface in areas that are colored red. The region marked in white shows areas that may be promising landing sites for future astronauts. (Credit: NASA/JPL-Caltech/ASU)

Where to Land on Mars

Finding shallow stores of ice over large areas of the planet means future Mars missions will have many options when choosing landing sites for astronauts.

And Piqueux found that there’s shallow ice not just near the planet’s poles, but at lower latitudes as well. This is a plus for mission planning, because it’s preferable to land away from the poles, and closer to the equator, when possible. It’s harder to land near the poles, and the climate is harsher there.

Piqueux says that further studies will give researchers an even sharper picture of where ice lies on the planet and what the terrain is like in those areas. Then, mission planners can identify where the best landing sites might be.