Some of the ancient grains may have been created by a boom in stars forming in the Milky Way about 7 billion years ago. 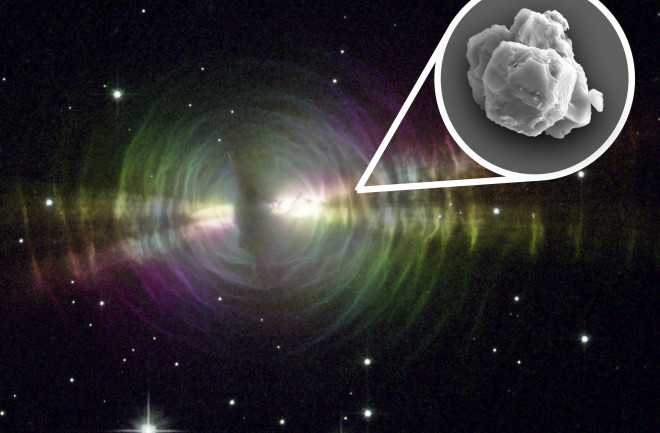 The Egg Nebula, a cloud of material that blew off of a matured star, has large dust grains that may be like the silicon carbide minerals found in meteorites. (Egg Nebula image credit: NASA, W. Sparks (STScI) and R. Sahai (JPL); Inset image: Janaína N. Ávila)

In pieces of a meteorite, scientists have found tiny mineral grains that are older than the sun and the solar system, which formed about 4.6 billion years ago. Some of these “presolar grains,” the researchers found, are between 5 billion and 7 billion years old, making them the oldest known materials on Earth.

The grains initially formed in interstellar space out of material ejected from mature stars that then condensed into dust. The researchers who identified the grains think many of them likely were created following a boom in star formation the Milky Way experienced some 7 billion years ago. If confirmed, the new finding demonstrates that researchers can study meteorites to better understand the history of star formation in our galaxy.

When small to medium stars (from about 0.5 to 5 times the mass of the sun) approach the ends of their lives, they expand into red giant stars and blow off their outer layers. This results in beautiful, expanding clouds of material that astronomers call planetary nebulae.

Over time, the material in these planetary nebulae cools and condenses into grains of dust and minerals. Some of these grains are then incorporated into clumps of interstellar gas, helping form new generations of stars, planets, asteroids and so on.

Any presolar grains that were present when Earth first formed are now long gone, changed by our planet’s geologic processes — including in volcanoes and through plate tectonics. But meteorites that fall to Earth from space rocks preserve these cosmic time capsules.

Ever since researchers began finding presolar grains in meteorites in 1987, they've studied these ancient relics to find out how old they are and where they came from.

Links to the Stars

In this latest research, a team of researchers, led by the cosmochemist Philipp Heck of the Field Museum in Chicago, analyzed 50 presolar grains containing a mineral called silicon carbide. The samples came from the famous Murchison meteorite, which fell to Earth in Australia in 1969.

When tiny, energetic particles called cosmic rays zip through space, they can strike minerals within rocks like tiny space bullets. This, in turn, causes some of the silicon and carbon atoms in these minerals to fragment into other elements like helium and neon.

By measuring how many of these minerals from the Murchison meteorite were transformed into helium and neon, researchers were able to determine how long they had been exposed to cosmic rays — and, thus, how old they are.

The researchers found that the ages of the silicon carbide grains they studied ranged from roughly the age of the sun to about 3 billion years older. Most of these grains were on the younger side, though ⁠— just 4 million to 300 million years older than the sun. Heck and his team think the abundance of these relatively young presolar grains might be further evidence that the Milky Way underwent a burst in star formation some 7 billion years ago.

Through other methods, astronomers have found clues that the Milky Way probably experienced more star formation than average about 7 billion years ago. So if you factor in the time it would have taken these stars to evolve into red giants and planetary nebulae, there should be an increase in dust grains that formed just millions of years before the sun formed, Heck said.

“I'm still excited about just the idea of having a rock, taking a rock out of a cabinet, extracting minerals and learning something about the history of our galaxy,” he said.

The researchers detailed their findings Jan. 13 in the Proceedings of the National Academy of Sciences.