Stanleycaris is a distant relative of insects and spiders. The discovery clarifies the timeline of how their body plans evolved. 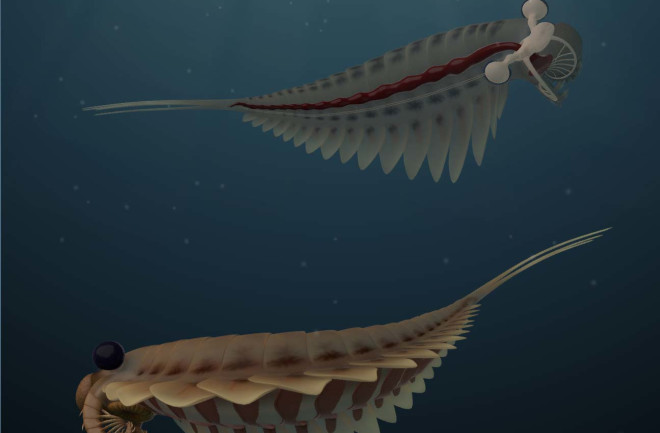 During Earth’s Cambrian period 500 million years ago, the seas teemed with weird and fabulous critters. One of them, the radiodont, had a predatory appendage, toothy circular mouth and a segmented body with swimming legs. It's an ancient relative of today’s arthropods, which include insects and spiders. In a new study, researchers report several hundred radiodont fossils with exquisitely preserved brains and nerves. The finding sheds light on how arthropods evolved their segmented body plans.

The sheer number and quality of the brains is astonishing, says lead author Joseph Moysiuk in a press release. “The details are so clear it’s as if we were looking at an animal that died yesterday.”

The team worked with 286 Stanleycaris hirpex fossils collected from the Burgess Shale in the 1980s and 1990s. The dig site in the Canadian Rockies is the best-known place to find Cambrian fossils. United Nations Educational, Scientific and Cultural Organization even named it a world heritage site in 1981.

Stanleycaris isn’t the biggest radiodont. At 20 centimeters long, it’s a magnitude smaller than its one-meter-long relative, Anomalocaris. However, its contemporaries rarely grew greater than the length of a finger. The length of 20 centimeters was probably sufficient to wreak havoc on smaller prey.

The head was differentiated from the rest of the body, which was divided into 17 repeating segments. This resembles the general body plan of today’s arthropods. But in today’s arthropods like insects, each segment has a neural center called a ganglion. The Stanleycaris nerve cord is completely non ganglionated. The researchers think that ganglia must have been a relatively recent evolutionary innovation.

Moysiuk says in a press release that “these fossils are like a Rosetta Stone, helping to link traits in radiodonts and other early fossil arthropods with their counterparts in surviving groups.”

Early arthropod fossils are rare, leaving scientists to piece together the scattered bits and pieces. The unprecedented preservation of brains and eyes in the new study provides elusive insights into how nerves evolved alongside an insect-like body plan. Co-author and professor at the University of Ontario Jean-Bernard Caron says that “this discovery is a crucial jump forward in understanding what [radiodonts] looked like and how they lived.”