An accidental discovery of a probable protoplanet orbiting the star AB Aurigae may challenge our understanding of how gas giants form. 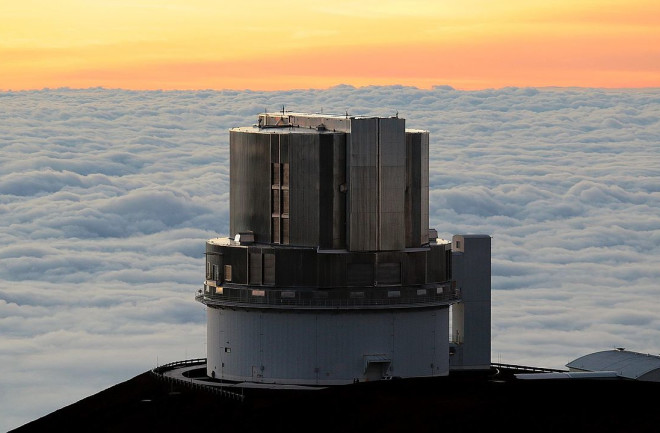 Legend has it that Isaac Newton first conceived of the concept of universal gravitation after an apple fell on his head, though the infamous piece of fruit may have actually just landed on the ground nearby. Nevertheless, accidents and serendipity have long played a significant role in scientific advancement.

This was the case for Thayne Currie, an astrophysicist at the NASA-Ames Research Center and the Subaru Telescope. Currie may have discovered the youngest-ever protoplanet, along with evidence of a controversial theory of planet formation, as reported in a recent Nature Astronomy study.

It all began in 2016, when he was trying to study a star with three possible protoplanets around it. Suddenly, Currie ran into a problem. “For whatever reason, our instrument couldn’t lock onto the star well,” he explains. “That was my primary plan for the night, so I had to come up with another plan — immediately.”

He needed to collect some observations, though it didn’t much matter what star system they were from. So he went looking for an alternate. AB Aurigae, a young star roughly 531 light-years from our sun, came to mind immediately. It was a relatively easy target, with “a bright protoplanetary disk that had a lot of structure,” he says. In astrophysical terms, structure refers to spatial variations, meaning that there was plenty to look at in this disk.

Other observatories and instruments had examined Ab Aurigae before, but the Subaru telescope at Mauna Kea, Hawaii offers cutting-edge technology. Currie explains. He also claims it’s the best on the planet for adaptive optics.

Apart from a multi-spiral disk around AB Aurigae, Currie also noted a bright, peculiar blob due south of the star. He figured it was just a distorted piece of the disk, yet he and his colleagues found it in another dataset. Currie’s team then found evidence that another paper had predicted a planet at that very location.

Currie noticed an unusual blob on AB Aurigae that led him to a surprising finding. (Credit: T. Currie/Subaru Telescope)

It all seemed very promising, but Currie notes that the field of protoplanet investigation resembles a graveyard of unsupported claims. “There’s a very long history of these claims being wrong, so you have to be especially careful,” he explains.

Yet 13 years of data from the Hubble telescope demonstrated that the hypothetical protoplanet was orbiting the star and moving counterclockwise, in accordance with what was known about the disk; other data suggested the brightness of the blob differed from that of the disk. Additionally, analysis of the polarized light’s intensity suggested that the blob was separate from the disk as well. “Those pieces of evidence together give us confidence we’re seeing a protoplanet, rather than something else,” he says.

Nor is it just any protoplanet. Aside from being the youngest one found to date, it’s unusually far from its parent star — a full 93 astronomical units (AU). This is the first chance scientists have had to probe a protoplanet still embedded in the gas and dust from which it formed, he explains, and provides evidence for a controversial theory of gas giant planet formation called disk instability.

Recipes for a Gas Giant

The conventional model, called core accretion, explains that planets emerge when rocky bits of material collide together, gradually growing and acquiring more gravity. It’s how scientists figure the rocky planets in our solar system formed. In 1980, a theory proposed by Hiroshi Mizuno suggested that sufficiently massive rocky planets, around 10 Earth masses, would have acquired enough gravity to become gas giants.

But in this case, Currie says disk instability offers a simpler explanation due to the large mass of the protoplanetary disk around AB Aurigae, as well as the protoplanet's distance from the star. According to the disk instability hypothesis, a particularly massive protoplanetary disk that’s far enough away from the parent star is cool and large enough for portions of it to collapse under their own gravity, forming spiral arms. From there, small perturbations and instabilities in the arms create gravity pockets, which draw material in. This creates a runaway effect: As the clump grows, it acquires more gravity and pulls material in even more rapidly. Eventually, a new planet materializes.

Considering that the AB Aurigae system has spiral arms, and the protoplanet identified by Currie and his team is more massive than Jupiter but over 20 times farther away from its star than Jupiter is from ours, it “corresponds to what we’d expect for disk instability,” he says.

B Aurigae is surrounded by a protoplanetary disk. (Credit: ESO/Boccaletti et al./Wikimedia Commons)

This was welcome news to Alan Boss, who first proposed the disk instability theory in 1997. During his thesis at the University of California, Santa Barbara, he wrote models that track the collapse of clouds of gas and dust as they form star systems. Boss hoped to understand how protoplanetary disks evolved. But when he ran the models, he found some systems formed spiral arms massive enough to collapse into themselves. “I wasn’t trying to find another way to make a planet,” he explains, “but I stumbled on it.”

He likens his theory to heresy in the scientific community. After all, the earliest exoplanet discoveries seemed to challenge his theory. The first 100 or so Hot Jupiters (gas giants that orbit very closely to their parent star, the easiest kind of exoplanet to detect) spotted by astronomers turned out to surround stars with higher quantities of metals, or any chemical elements heavier than helium. The idea was that if you had more metals, you had more materials to build Hot Jupiters via core accretion, he says. And since astronomers were finding more planets around those stars, it was taken as proof that core accretion was forming those planets.

“So it was stunning to see these [recent] results, of what certainly looks like a protoplanet in the midst of a spiral arm,” he says. The next step, in his opinion, is establishing the size of the mass they’re examining. Since core accretion starts small and builds, whereas disk instability starts big and shrinks (as the cloud collapses to form the gas giant), it will be crucial to determine the protoplanet’s size.

AB Aurigae may hold even stronger evidence supporting disk instability. Currie’s team flagged two areas of interest at astronomically greater distances, around 430 to 580 AU away from the star. “Morphologically, they look like clumps,” Currie says, and “we’re flagging them as potential sites for planet formation.” If they do turn out to be protoplanets, he doesn’t see how they could have been formed via core accretion.

Boss says he has run models of stars with about 1.5 solar masses, which are smaller than AB Aurigae (it has about two solar masses). “I showed it could easily produce four or five massive clumps,” large enough to potentially collapse into protoplanets, he says. So, if those other features turn out to be bound and orbiting the star, he sees evidence for disk instability.