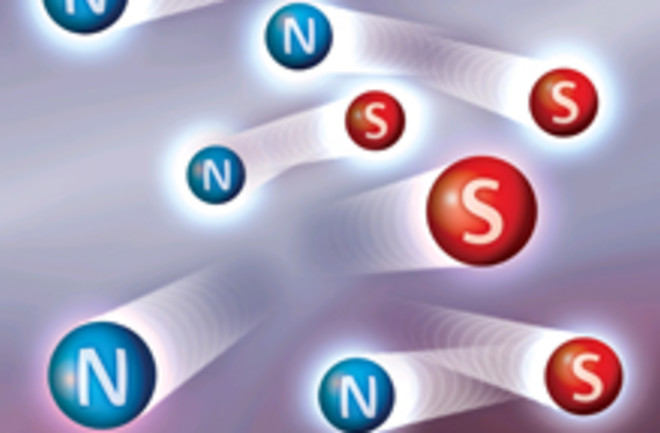 Magnets may have seemed simple when you learned about them in elementary school, but physicists are coaxing some very odd behaviors out of magnetic materials these days. In the latest new development, scientists created the magnetic equivalent of electricity and named the phenomenon "magnetricity." In the same way that electrically charged particles flow to create an electric current, individual north and south magnetic poles have been observed flowing along to generate a magnetic current. The basis of the experiment was a refutation of a rule of magnetism observed in our day-to-day lives: No matter how many times you divide a magnet, the resulting fragments will always have both north and south poles. But more than 70 years ago, physicist Paul Dirac theorized that elementary particles should exist that have only a north or south pole, and dubbed these theoretical particles magnetic monopoles. Last month, researchers got closer to spotting a monopole than ever before, when they created ripples that had the same magnetic properties as monopoles. The new study, published in Nature, describes the phenomenon in a strange, crystalline material known as spin ice.

These crystals are made up of pyramids of charged atoms, or ions, arranged in such a way that when cooled to exceptionally low temperatures, the materials show tiny, discrete packets of magnetic charge. Now one of those teams has gone on to show that these "quasi-particles" of magnetic charge can move together, forming a magnetic current just like the electric current formed by moving electrons [BBC News].

To study the phenomenon in greater detail, the research team

injected muons – short-lived cousins of electrons – into the spin ice. When the muons decayed, they emitted positrons in directions influenced by the magnetic field inside the spin ice. This revealed that the monopoles were not only present but were moving [New Scientist].

The ripples of distinct north or south charges moved about at random until a magnetic field was applied, which caused the charges to flow through the crystal as a current. This may seem like fairly abstract research, but physicist Steven Bramwell swears that it could have practical applications--they'll just be a ways down the road.

Data is stored on computer hard discs by magnetising their surfaces in patterns that represent 1s and 0s. Bramwell speculates that monopoles could one day be used as a much more compact form of memory than anything available today, given that the monopoles are only about the size of an atom. "It is in the early stages, but who knows what the applications of magnetricity could be in 100 years time," he says [New Scientist].

Related Content: 80beats: Physicists After the Elusive Magnetic Monopole Spot a Look-Alike DISCOVER: Three Words That Could Overthrow Physics: What Is Magnetism? DISCOVER: More Magnets, PleaseImage: ISIS. Atom-sized north and south poles in spin ice drift in opposite directions when a magnetic field is applied.