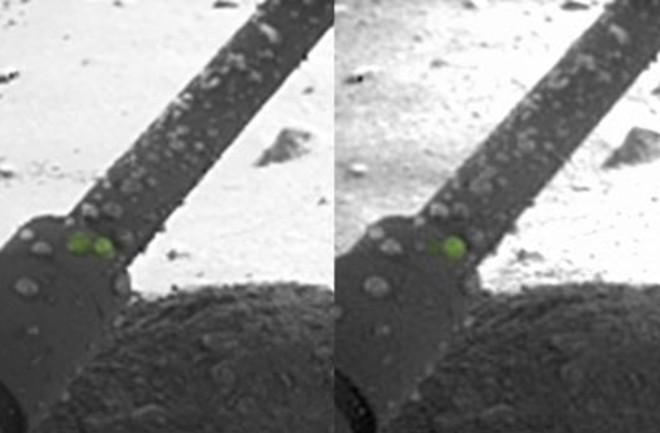 The Mars Phoenix Lander conked out in November, ending the active mission of the robotic scientist, but the results of its five months of research on Martian geology are still coming in. In a late-breaking update, some Phoenix scientists now declare that they spotted several drops of liquid salt water on the lander's legs; this would be the first time liquid water has been detected and photographed beyond Earth. The researcher who proposed the hypothesis, Nilton Renno,

was careful to say, “This is not a proof.” But he added: “I think the evidence is overwhelming. It’s not circumstantial evidence” [The New York Times].

Liquid water would boost the possibility that microbial life could survive beneath the Martian surface. Renno bases his claim on images that show several blobs on the lander's legs that changed between snapshots, seeming to merge and grow in size. The dramatic assertion has divided the Phoenix's science team, with some researchers arguing that the low-resolution pictures actually show nothing more than clumps of frost.

"It's highly unlikely that [liquid water is] the explanation," said Michael Hecht of NASA's Jet Propulsion Laboratory.... "It's just water vapor moving around. It's an ordinary, unexciting explanation" [AP].

Phoenix was not expected to detect liquid water where it landed near the Martian north pole, as temperatures never went above -15 degrees Fahrenheit during its mission, and any ice that was exposed to the atmosphere was expected to sublimate, transforming directly from ice to water vapor. But the liquid water faction

proposes that perchlorate salts, discovered in the Martian dirt by Phoenix's wet chemistry lab, were concentrated enough in a patch at the spacecraft's landing site that they could lower the freezing point of the water ice, causing it to melt into a salty brine (this is the same phenomenon that causes sidewalk salt to melt down snow and ice in the winter) [SPACE.com].

Renno thinks that there may be pockets of liquid brine just below the Martian surface, and that one splashed up onto the lander leg when Phoenix landed. With the scientists squabbling,

Peter H. Smith, the mission’s principal investigator, is left to mediate the disagreement. He wonders whether the material, splashed up and possibly transformed by the heat and spray of chemicals from the thrusters when Phoenix landed, tells much or anything at all about the conditions on Mars [The New York Times].