Scientist Smackdown: Are There Signs of Life in a Meteorite From Mars? 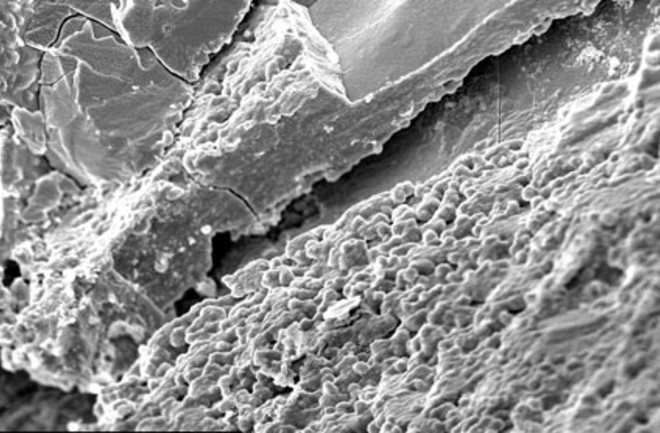 It's back. ALH 84001, the meteorite of Martian origin that NASA scientists claimed in 1996 contained evidence of life on Mars, has returned to the scene. This time, the team published a paper in the journal Geochimica et Cosmochimica Acta (the journal of the Geochemical and Meteoritic Society). And the scientists say they're more confident than ever that the meteorite shows signs of martian life. The NASA team of David McKay, Everett Gibson and Kathie Thomas-Keprta garnered widespread attention and even an announcement by President Bill Clinton when the 1996 paper came out. The NASA claim focused on nano-sized evidence: magnetite crystals embedded in the meteorite, which arrived here on Earth 13,000 years ago. Because some Earth bacteria secrete magnetite, McKay and his team argued that the mineral in the meteorite could be of biological origin, and the 'biomorphs" in this image (which is from the new study) could be a fossilized colony of tiny bacteria.

But the research was widely panned, and the NASA team making claims for life on Mars subsequently retreated [Discovery News]

. As a host of other scientists pointed out in the late 1990s, those very same crystals could be created in a lab by heating carbonates, and the meteorite's magnetite could have easily resulted from processes that didn't involve life.

Maybe it was a result of the heat and shock involved in ripping the rock away from Mars 15 million years ago, as John Bradley, of Georgia Technical School of Materials and Technology, told the BBC back in 2000, the last time this story broke out in a major way [Nature News]

. But over the last 13 years, as the evidence for water and perhaps life on Mars rose thanks to new satellite data and missions like the Phoenix Lander, NASA's team didn't stop believing that bacteria gave birth to the magnetite crystals. Going back over the data, they say in the new study that the minerals formed at a relatively low temperature. That means the magnetite probably wasn't the result of thermal reactions in carbonates, they argue, so the biological answer is by far the most likely.

Dennis Bazylinski, an astrobiologist from the University of Nevada who peer-reviewed the findings, said: “Until now I was on the fence but this paper has really thrown out the non-biological explanation” [The Times]

. Bazylinski says the grains in this new study look basically identical to those created by the bacteria we know here on Earth, which sold him. Despite his enthusiasm, however, he admits that one meteorite can't be clear evidence of martian life. The University of Hawaii's Michael Fuller remains in the camp of the unconvinced.

"Most of them (the grains discussed in the new research) appear too small. It doesn't look to me that they are very similar to magnetotactic bacteria. It seems to me that they haven't really solved the whole thing. I remain a skeptic" [Discovery News]

. Related Content: 80beats: Scientist Smackdown, all our stories of friendly disagreements among scientists Bad Astronomy: Did Life Begin Out There? DISCOVER: Phoenix Lander Strikes Ice on Mars DISCOVER: Find of the Century? (On the 1996-7 hubbub) DISCOVER: Life From Mars (On McKay's claim to see the same tiny fossils in other meteorites) Image: NASA