Science in the Skies: Studying Clouds with CitSci 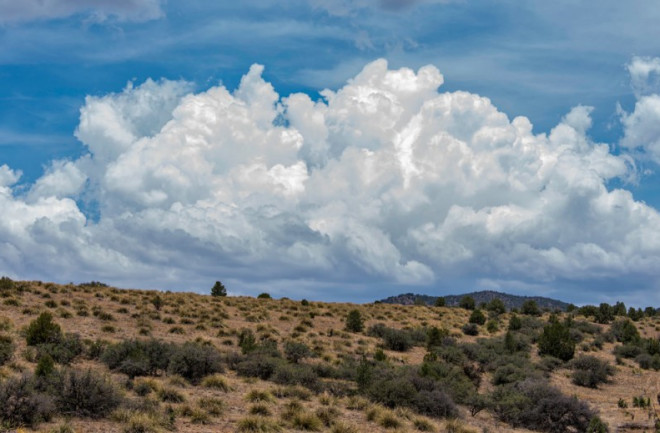 Clouds are so democratic. You don’t need to be rich or famous or smart or athletic to enjoy the majesty of clouds. You can just look up into the sky wherever you are and be knocked out by their beauty and elegance, their size and changing shapes, their relationship to light--the way clouds glow lit from behind, the way dawn edges them with a fluting of pink and sunset colors them orange and gold. Throughout the day, you can watch clouds billow and mass, flat-bottomed ships sailing and crashing, cloud architecture, cloud turrets, cloud towers, cloud streets, weird streaks, wisps, tails, cumulus, cumulonimbus, stratus, cirrus, mamma, virga. On some days, you stand transfixed under a cloudscape so continuously grand and mystical that the mind eventually loses interest. You sigh and continue on your errands. What’s for lunch? Citizen scientists study clouds for the program S’Cool (Students’ Clouds Observations On Line) developed and run by NASA. Participants time their observations of clouds to the very moment a weather instrument is passing overhead and observing the same clouds. This helps confirm the accuracy of an important network of satellites orbiting Earth known as CERES for Clouds and Earth Radiant Energy Systems. At S'Cool, the scientists explain, "The cloud properties we are seeking are cloud type, cloud cover, and cloud thickness." Knowing more about clouds is increasingly important as we struggle to understand how climate change affects clouds and what kind of cloud cover increases or decreases global warming. S’Cool is wonderfully user-friendly. Anyone can participate in S’Cool as a Rover Observer or individual citizen scientist, although the project is more specifically designed for students and teachers and includes hand-outs, lesson plans, and classroom activities. Since its beginning in 1997, S’Cool has received over 125,000 observations from young people in 83 countries around the world. As a Rover Observer, I log into the S’Cool website, determine my current longitude and latitude with the help of a very S’Cool map, and am emailed a schedule for the next two weeks of satellite activity over that location--when I should go out and observe clouds. I can watch clouds from anywhere, but my preferred spot is the front porch of my house in southwestern New Mexico. Typically, NASA’s weather satellites pass overhead here at least six times a day. At any one of those overpass times, I walk out now in my front yard with a printed report form. My job is to check for cloud cover, sky color, sky visibility, contrails, high level clouds, middle level clouds, and low level clouds. In these last three categories, I will further note cloud type (cirrus, altostratus, stratocumulus?), cloud cover (isolated, scattered, broken?), and visual opacity (opaque, translucent, transparent?). S’Cool provides plenty of information to help me decide. Later I transfer my data into an online report on the S’Cool website. For my first observation with S’Cool, there was not a cloud in the bright blue New Mexican sky. So—that was easy! Days later, a storm system moved into the rural valley where I live. Low level nimbostratus clouds were everywhere, mostly opaque with patches of translucence. In a few days, I was recording the rippling layers of middle level altostratus, between 2000 to 6000 meters, the prelude to another storm. Over the next week, I noted as well the wisps of high cirrus clouds, over 6000 meters, made of ice crystals instead of the water droplets of middle and low level clouds. For each observation I sent S’Cool, the program sent back an email with a chart showing how my observation had matched with the satellite’s observation. This was helpful and motivating. Like most citizen scientists--and scientists, too--I bring a personal relationship to the subjects I study. When I look up at the sky, I sometimes think about my father, a test pilot who flew and crashed the experimental X-2 in 1956, going three times the speed of sound—briefly the fastest man on Earth. Captain Milburn Apt died when I was two years old. Although I don’t know very much about this man, I do know that he loved clouds. On home movies taken over the Grand Canyon, he did not pause long over his wife and two daughters before panning that new 1950s movie camera across the clouds billowing in the Arizona sky, clouds he loved from many hours of flight in all kinds of airplanes, crop dusters and F150 Starfighters and B-50s, clouds where he felt completely at home. I have always loved clouds, too, and I am grateful that my father and I share this connection. Clouds make me feel grateful in general—those masses of white cumulus sailing in a cerulean blue, their edges so crisp they look painted on. Or the birth of a thunderstorm, when the great expanding pillars first begin to rise higher and higher and higher. Or just a single wispy cloud in a winter sky, like a friendly doodle. With my data sheets from NASA, I now have even more reason to look up and study clouds. And that’s entirely a good thing.