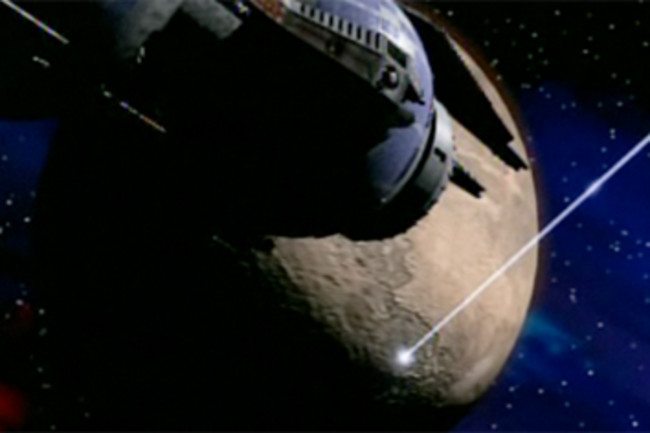 As noted over on 80 Beats, scientists using the Spitzer space telescope have found strong evidence that Epsilon Eridani has a solar system not unlike our own, with rocky planets orbiting in the inner solar system and gas giants orbiting further out. Science fiction writers must have breathed a collective sigh of relief, as Epsilon Eridani has been used in countless novels, short stories, TV shows, and movies as the location of more-or-less Earth like planets. Nothing dates a science fiction story like the cold hand of reality, such as when Mars was revealed to be a cratered desert with not a canal in sight, or when the clouds of Venus were shown to be concealing a lethal landscape of shattered rock, rather than lush jungle swamps. In describing Mars as place with canals, and Venus as a lush jungle, science fiction authors weren't making it up entirely unbidden -- early scientific thought had speculated that Mars and Venus did have canals and jungles. It wasn't until the space age arrived and we could send probes out to check in the 1960s that the truth emerged. Similarly, because Epsilon Eridani is close in mass and spectral signature to our own sun, scientists have long speculated that it might be a good location for a habitable planet. The fact that it is also one of our closest galactic neighbors, just 10.5 light years away, has also made it a serious candidate for a visit by a first- or second-generation interstellar space probe, when we get around to actually constructing them. With all this legitimate scientific interest, it's not surprising science fiction authors jumped on the Epsilon Eridani bandwagon: in TV and movies alone, Epislon Eridani has appeared as the location of the Babylon 5 space station, Mr. Spock's homeworld, and is the chosen destination for the crew featured in the upcoming Virtuality. This time it appears as if their faith in scientific speculation has been justified, with their stories avoiding the fate that befell Wells' The War of The Worlds or Heinlein's Space Cadet. At least, until we send that probe out.

The SciencesHow Are Exoplanets Discovered?
Recommendations From Our Store