Science Behind the Camera: Snapping Pictures for Climate Research 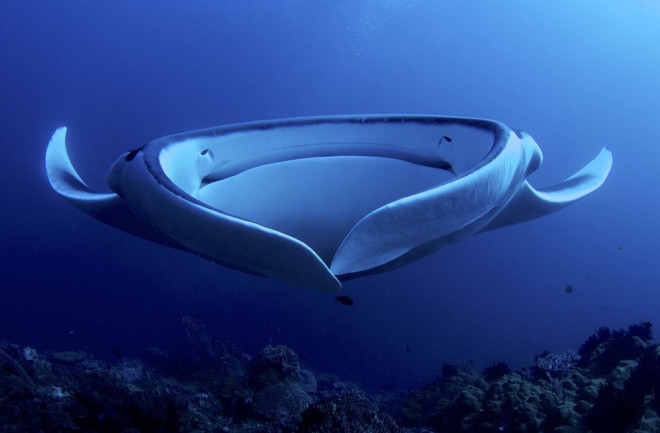 A giant manta filter feeding "Giant Manta AdF" by Arturo de Frias Marques - Own work. Licensed under CC BY-SA 4.0 via Wikimedia Commons. by Nina Friedman In 2015, mankind will take about one trillion photos. Up until 2010, 3.8 trillion photos had been taken. If taking photos solved climate change, 2015 would cause the earth’s climate to be cesspool-level stagnant. As we know, taking photographs does not solve climate change -- If only. Still, citizen science projects like RedMap use photography to collect data on our changing environment. RedMap asks its Australia-based volunteers to keep an eye out for nonnative marine species and to document their findings through photos. RedMap combines science and picture taking with the 21st century tools of social networking to get the job done. For instance, with the user-friendly RedMap app and website you can take a selfie with a foreign fish, estimate some physical characteristics about the creature (size, weight, etc.) and watch as other users comment and Tweet about your awesome finding. Marine Biologists use this data to learn which ocean areas have the fastest changing temperatures. They see which species have the ability to adapt to new locations as ocean temperatures shift and the species become displaced from their previous environments. The project looks at the migration patterns of marine creatures and the health of the creatures as they migrate. Most of the individuals recorded in RedMap’s database are stray individuals riding south with the warm currents but some species like the green colored eastern rock lobster are beginning to settle in new southern environments. Commercial fisheries hope to be sustainable both in regards to the environment and business, so the RedMap data helps them appropriately shift their fishing patterns and determine upcoming market expectations.

Mahi Mahi by Natasha Briggs, Location: Western Australia Dr. Gretta Pecl is the founder of RedMap and she continues her role in the project as chair. For further information on migration among marine species, check out this video. You’ll also find a nice shot with a dramatic overlaid transparent image of Dr. Gretta Pecl. Dr. Jemina Stuart-Smith is another crucial member of the project, serving as RedMap’s National Coordinator. I spoke to Stuart-Smith about the early days of the project, in 2012, when funding had just begun to roll in. The team was manually uploading all of their website’s submissions while they worked out bugs and improved usability. “[We were] sending random photos to each other to test whether the platform was working,” Stuart-Smith recalled. “I submitted one to the team of my brother cleaning the pool in his underwear.” The real-time testing seems to have paid off. I tried out the submission process through the website and app. Both are fun and easy to use. Additionally, a comment section makes the program interactive. Stuart-Smith says making people realize they actually are informed citizens with the power to make an impact is rewarding. In the end, Stuart-Smith says RedMap has two visions: “fostering a community and monitoring the environment.” The project takes a preexisting community of fishers and divers, provides a platform for them to connect further, makes use of the information they share, and teaches them about the species they see. “We hope to provide the gap between science and the community” Stuart-Smith proudly explains, “People respect the information that scientists provide them with when they, themselves have contributed.” With 1893 sightings confirmed so far, this project is heavily established. 14-year-old Georgia Poyner, a diver, started volunteering for RedMap this year but she has participated in a number of other citizen science projects. She began participating because of her interest in marine life, and she plans on continuing to contribute because of the vibrant, supportive community. Poyner says she loves “being able to share things that [she has] seen and photographed with other like-minded people.” She doesn’t mind the public credit either. She recently spotted a Cephea cephea, a jellyfish that had only been seen in Australian waters once before, nearly 100 years ago. The jellyfish went on display in the Australian Museum. When asked how she felt about the find she said, “pretty stoked!!”.

Think RedMap is super awesome but you’ve found yourself far away from Aussie land? Me too. You can get involved by becoming part of their online community, responding to posts and reading up on marine life. You can also look to our newsletter and database to find a marine citizen science project closer to your home.

Nina Friedman is finishing up her undergraduate degree in neuroscience at Colorado College in Colorado Springs. She recently acted as EyeWire’s Education Intern connecting the citizen science computer game to a secondary school curriculum. She spends most of her free time climbing rocks and coming up with science-related pick-up lines to post on the internet.