Science and Religion Clash Over Telescope Construction on Sacred Summit 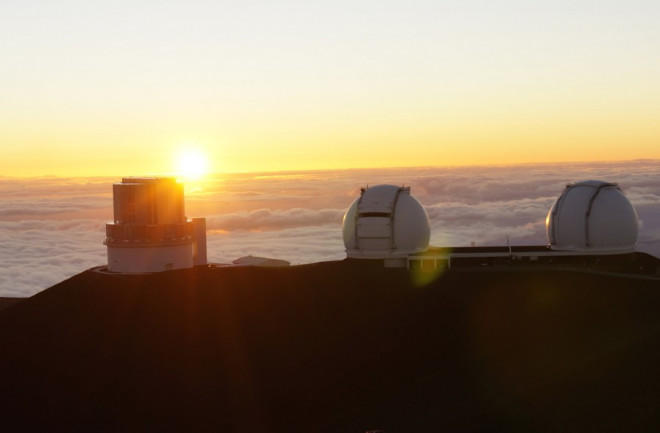 The existing telescopes on Mauna Kea. Image by flyingsinger via Flickr When Paul Coleman summits Mauna Kea, the dormant volcano in Hawai’i that rises 13,796 feet above the Pacific, he is struck by two things. First there are the colossal observatories, whose domes gleam in the sunlight by day and glimpse the farthest reaches of the universe by night. Second, there is the red dusted mountain itself, which in his religion is the home of the gods. But Coleman, an astronomer at the University of Hawai’i and a native Hawaiian, may be one of the few people on Mauna Kea who can fully appreciate this dichotomy. Today, the sacred mountain has become a battleground between astronomers, Hawaiians and environmentalists. The issue is that astronomers have placed 13 telescopes at its summit and now wish to build one more: The Thirty Meter Telescope (TMT), which will be the largest and most powerful yet. The telescope’s opponents argue that not only is the volcano sacred ground, it’s environmentally fragile land and also ceded land, meaning that it should be used for the benefit of native people. While the operators of the new telescope have held many conversations with Native Hawaiians, conducted a thorough environmental impact statement and proposed paying $1 million yearly for the land plus another $2 million yearly to support local education programs, the protestors say it’s not enough. “Mauna Kea is our temple,” said Kealoha Pisciotta, one of a half-dozen plaintiffs suing to stop the project. “It's not a question that we’re against astronomy. We're just for Mauna Kea.” But for astronomers like Coleman, the colossal telescope is also a temple. With a mirror nearly three times larger than any other on Earth, it will see deeper into the universe than any other ground-based telescope. And built with phenomenal optics in such a pristine location, it will produce sharper pictures than even the Hubble Space Telescope.

Two lawsuits are in motion against the $1.5 billion project. In October, activists disrupted the project’s groundbreaking. And on April 7, Hawai’i Governor David Ige halted construction after more protests and over a dozen arrests. He has since extended the moratorium several times, with no timetable for resuming construction. The amount of development at the summit is among the native Hawaiians' complaints. Some of the telescopes can now be seen by 72 percent of the island’s population, causing the plaintiffs to refer to it not as a sacred summit but as an “industrial park.” Native Hawaiians still practice many religious ceremonies on the mountain, and Mauna Kea’s slopes are dotted with shrines, altars and burial grounds. Some ceremonies include walking from sea level to the summit. Others include gathering snow water from sacred places for medicine. All include placing yourself in time and space in a way that allows you to appreciate your connectedness with nature. “It is a stunningly beautiful experience to stand on the side of the mountain and look out,” said Deborah Ward, a retired environmental scientist at the University of Hawaii and another plaintiff in the case. “To me it’s a spiritual experience… And frankly I know very well that one more telescope will not make it better, it will make it harder to enjoy that experience.”

The proposed telescope is near and dear to the hearts of astronomers not just in Hawai’i but worldwide. It will combine 492 individual hexagonal mirrors, each 1.4 meters across, to make it the first “mega-telescope” — the next generation of observatories that will open the door to major discoveries.

Artist's rendering of the Thirty Meter Telescope. Courtesy: TMT TMT's construction is racing against that of two other competing telescopes — the European Extremely Large Telescope and the Giant Magellan Telescope — both of which will be built in Chile. Although Pisciotta argues that the TMT corporation should simply invest in these two other telescopes, the TMT’s equally pristine location is irreplaceable. At 20 degrees north of the equator, it will be able to scan the northern skies, invisible from Chile. Astronomers are eagerly anticipating the telescope’s arrival with a long to-do list. The mega-telescope will search for signs of life outside the solar system, observe the stellar explosions that created the elements abundant in human beings and glimpse the farthest edge of the universe.

But the debate is actually only tangentially about astronomy. Rather, protestors say, it's a cultural, environmental, and land-use debate. Not only is the land sacred and fragile, it’s a part of the 1.8 million acres of land (nearly 44 percent of Hawai’i’s total land) that were once the crown lands of the Hawaiian monarchy. When Hawai’i became a U.S. state, a number of clauses described how the lands could be used, one of which is for the benefit of native Hawaiians. A recent study found that in 2012 astronomy created an economic impact of about $168 million and brought almost 1,400 jobs to the islands that year alone. But though astronomy brings economic benefits to the islands, it's debated whether those benefits are being shared amongst all residents. “That raises the issue of whether or not native Hawaiians are being cheated by the fact that the holder of the master lease, the University of Hawai'i, basically pays $1 a year for that lease and then sublets the lands out under these telescopes,” said Jon Osorio, a professor of Hawaiian studies at the University of Hawai’i. “There are no substantial benefits going to native Hawaiians for the building of these multi-million dollar projects on the top of the hill.”

The TMT won’t pay a $1 lease like the other Mauna Kea telescopes. They will pay $1 million to lease the site and give another $2 million toward education and training for Hawaii residents for the next 50 years. “It’s such a powerful way for Hawaiians to enter into this century,” Coleman said of the educational funds. Its owners, an international consortium based in Pasadena, California, have been far more careful than their predecessors in taking opposition seriously. Henry Yang, board chair of the TMT, and Jean-Lou Chameau, president of Cal Tech, flew to the Big Island more than 15 times to talk to the community. But progress has been stop-and-go. In 2011 there was a contested case, but the board ruled in favor of the TMT and they were given the go-ahead to begin construction. Then the opponents took further action and went to court. They lost the first round in May 2014, but have since appealed that decision to the Intermediate Court of Appeals. The fact that both previous cases have been ruled in their favor encourages the TMT leaders that the telescope will be built. Still, it might take a while before the court cases are resolved. “My understanding is that the intermediate court of appeals takes a long time,” said Sandra Dawson, the Hawai'i community affairs manager for the TMT. “On our schedule we don’t even have a possible date.”

Although the halted construction trucks might make it look as though all work has been stalled, TMT managers are continuing to move forward. They met in Pasadena in late April to discuss the Hawaiian protests, a recent funding commitment from the Canadian government, and other logistics crucial to the project. Meanwhile, TMT partners continue to grind the telescope’s many mirrors and work on the telescope’s various instruments. Although protests are ongoing, opponents, too, are taking the long view. Pisciotta stands firm that they will win in the Supreme Court. But if that case fails, she says, then “there are other places where legal challenges will come forward," including possibly contesting the University of Hawaii's current lease of the overall summit area, set to expire in 2033.