Schrödinger’s Cat Experiment and the Conundrum That Rules Modern Physics

Why Schrödinger (figuratively speaking) put his cat in the box — and why it may never get out. 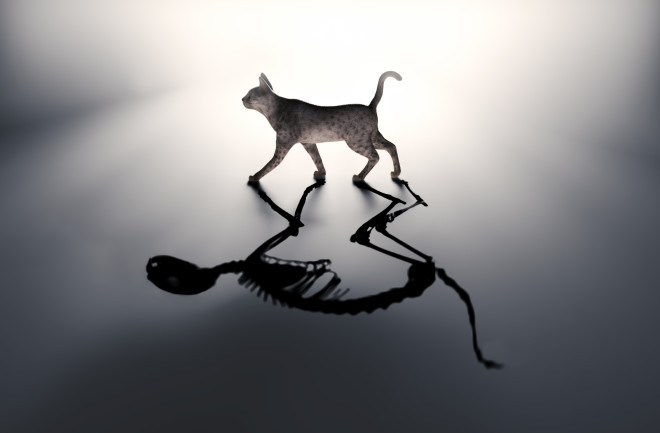 Long before cats conquered the internet, two of the greatest physicists of our time  — Erwin Schrödinger and Albert Einstein — devised what almost seems like an evil thought experiment.

It goes something like this: You have a cat in a completely sealed box impervious to any observation from outside. Inside is a kind of device involving a Geiger counter, poison, and radioactive material whose atoms may or may not enter a state of decay in equal probability over the course of an hour. If one atom does decay, the Geiger counter detects the radiation and triggers a hammer that breaks open the vial of poison, killing the cat. If no atom decays, then the cat lives.

Of course, the device was only theoretical. Schrödinger developed the scenario in a discussion with Einstein in response to misinterpretations of quantum mechanics at the time. It was a way to describe how a concept that seemed to apply to minute electrons in atoms might apply to a complex object in the macroscopic world — in this case, a cat.

While Schrödinger’s cat remains something of an infamous thought experiment, the original equation he originally derived the scenario from has gone on to represent the foundation of quantum mechanics. It involves the idea that something can be in two simultaneous states and only becomes one or the other when observed, detected, or even when it interacts with other particles. That fundamental theory of physics has modern-day applications that include everything from supercomputers to chemistry and superconducting magnets.

“[The Schrödinger equation] is like a modern version of Newton’s law,” says Chen Wang, an assistant professor of physics at the University of Massachusetts Amherst.

The Theory in Question

In the 1920s, Schrödinger and other physicists were concerned with a problem that couldn’t be explained by classic physics. The smaller a particle becomes, the less clear its position or speed becomes.

“Quantum mechanics adds a level of fuzziness to the position of particles,” says Wang.

Electrons form the base of the theory — in particular, the single electron in a hydrogen atom. Whereas scientists previously described electrons as orbiting the nucleus in an atom, quantum physicists observed that things weren’t quite this simple. Rather, they seemed to exist in several places at once. Or they blinked back and forth, between specific areas without appearing in between. In fact, the only thing you can say for sure is that an electron is not in one place at one time.

“It’s fundamentally uncertain where exactly the position [of an electron] is,” Wang says.

Instead, you have to describe an electron’s position as a wave function, or a probability distribution that describes where the electron is more likely to occur. The term superposition in quantum physics is used to describe how an electron in this case can seem to exist in multiple positions at the same time.

If you’re not lost yet, the idea gets even wilder when you add an extra electron. In helium, for example — which has two electrons — each one can only be described as probably being in a given area at a given time. But they also can interact and affect each other despite their distance in a process known as quantum entanglement, or “spooky action at a distance,” as Einstein called it.

Another way to think of it is that changing the state of one electron means the state of the other has to change as well.

“The description for two electrons cannot be directly produced by thinking of two independent shapes,” says Frederick Strauch, a physicist at Williams College in Massachusetts. “We can think of them as somehow jumping between the different shapes.”

The scenario involving Schrödinger’s dead — or undead — cat in a box involves a thought experiment to describe how the state of electrons might conceivably affect something much larger, in the macro world. He created it in response to a theory of quantum mechanics by other physicists called the Copenhagen interpretation to show the potential shortcomings of their view.

Since we can’t see in the box at the end of the hour or send any type of probe inside, according to the Copenhagen theorists, the radioactive atoms remain in a superposition of both decay or non-decay. The cat, in turn, depends on this superposition, as we don’t know whether it’s alive or dead. In a quantum sense, its superposition remains in both states at the same time, as a wave function that is both alive and dead. The entanglement is represented by the connection between the radioactive atoms and the cat, says Strauch.

When we open the box and look inside, or if the outside world somehow interacts with the inside of the box, the wave function is forced to collapse into one state, and the cat becomes dead or alive.

The thing is, Schrödinger didn’t actually mean for the situation to be taken seriously. The fact that an observing scientist’s curiosity could kill the cat was meant to show how an earlier interpretation of quantum mechanics was ludicrous.

“He’s kind of alluding to the fact that the theory is sort of silly to apply to the macroscopic world,” Wang says. “There might be something missing.”

But his thought experiment has since taken on a life (or death) of its own, with many people believing that the cat would be dead and alive at the same time. The only shortcoming of such a thought experiment may rest in our technical inability to carry such an experiment out.

Even if Schrödinger himself didn’t believe the cat theory was possible, modern researchers are trying to put some of these theories into practice. In 2016, Wang and his colleagues managed to demonstrate that it’s possible to entangle multiple particles. They managed to measure the entanglement of up to 80 photons, or light particles, placed in special boxes connected by a supercurrent that flows without voltage. In basic terms, it meant the spin they put on photons in one box could be observed in the other box even though they hadn’t spun the latter. Photons without spin also existed in both boxes. Metaphorically, it’s like a live cat and a dead cat were found in two different boxes that were correlated.

Quantum mechanics is already leading to practical applications. Quantum computing is one method, in which the harnessing of superposition and entanglement allows faster calculations than classical computers. Strauch says there are many potential applications of this, but researchers are already on the cusp of using them to calculate chemical formulas in a virtual space to design drugs.

But it may still take a long time before researchers figure out a way to run Schrödinger's experiment. If they ever do, and even the man himself thought this was unlikely, then it could show how the microscopic quantum world might affect the macroscopic world.