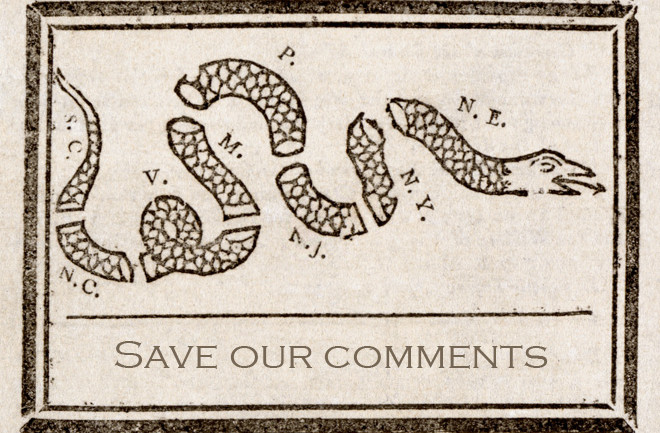 Comments should be not lost forever. Image: Benjamin Franklin / Wikimedia Commons.UPDATE March 17: So, the update didn't occur over the weekend. Thus, the comments are still here. I have been told that we will likely be able to import the old comments when the update occurs, but no ironclad assurances have been made so far. I will keep everyone appraised as we move forward, but thanks for all the support so far. ------- Over this weekend, the electronic infrastructure that supports all of the Wired pages will be undergoing a much needed update. That's the good news. The bad news is that in someone's infinite wisdom, they have decided that they're not going to bother to move all of the old comments (e.g., every comment left here before this coming weekend). So, all the comments will be gone*. Poof. The comments won't be deleted as such, but they just won't be moved to the new service, meaning they will be effectively gone. Luckily, this means that they can be brought back after the fact, but there is no plan to do so right now. This, my friends, is outrageous. As you all know, comments here on Eruptions are vital and contain a healthy discourse of ideas, observations and images from eruptions, links to new studies and commentary from people at the volcanoes doing the erupting! Now, the comments will be saved in one form or another, but what is needed is to convince the powers that be that we need to have those old comments moved into the new system so that they may survive in posterity with the posts. If you think that the old comments should be moved, leave a comment on this post. We'll save the comments and send them to the powers that be to convince them that keeping those comments and moving them to the new site is not optional. I can't guarantee that the comments will be preserved immediately, so there might be a time where it will look like the comments are gone. I also can't guarantee that the comments will ever come back, but hopefully with your support, we can convince the decision-makers that just removing the comments is not a tenable solution.