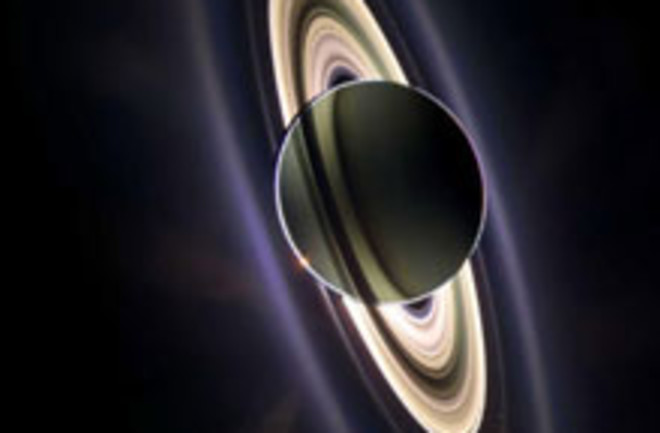 They're new, they're small, and they didn't make sense. That's what could be said for five of the littlest members of Saturn's expansive satellite family. The largest of this group, Janus, measures barely more than 100 miles in diameter, but it's the age of these little moons that's the odd bit. Their clean, crater-free surfaces help reveal that they're only 10 million years old, meaning they didn't form the way the planet's other moons did—from the accretion disk that formed mighty Saturn itself billions of years ago. This week in Nature, astronomers published evidence to support an explanation for that oddity: Those moons formed from Saturn's rings. Like so much new knowledge about the sixth planet and its moons, including Titan and Enceladus, the research team's findings come from the Cassini mission:

Sailing past Saturn's outer rings, it found lumps of ice up to 100 metres across, ten times bigger than the rings' other icy particles. For some researchers, the discovery called to mind another intriguing fact: that the moons and the rings share a composition of the purest ice in the Solar System. "When you put all this together, you had the strange feeling that something is going on in the rings' outer edge," says Sébastien Charnoz at Paris Diderot University, who was involved in the latest research [Nature].

Some scientists had suspected this explanation, but they lacked the computer power to model how it could happen (even the most powerful machine would struggle to model the trillions of orbits in the solar system's history). So the team created a simplified model with the ring as a single dimension, tested it out on our own planet and moon's history, and then applied it to Saturn and its rings. At the out edge of the rings, it works: material can clump together.

"Disks in astrophysics are like pancakes—they spread," [Charnoz] says, adding that collisions within the disk or ring drive the spreading detritus outward. Once the icy ring particles venture beyond about 140,000 kilometers from Saturn's center, they become unstable, clumping into tiny protomoons and then moonlets [Scientific American].

As the clumps get bigger, Saturn's gravity pushes them further out (our own moon is slowly receding from us). While it's nice to have a workable answer to the puzzle, the bigger implication is that the solar system is alive. Says Charnoz:

"There are still new objects forming in the solar system today. We used to think everything was formed four, five billion years ago, but no! New objects are still forming today" [MSNBC].