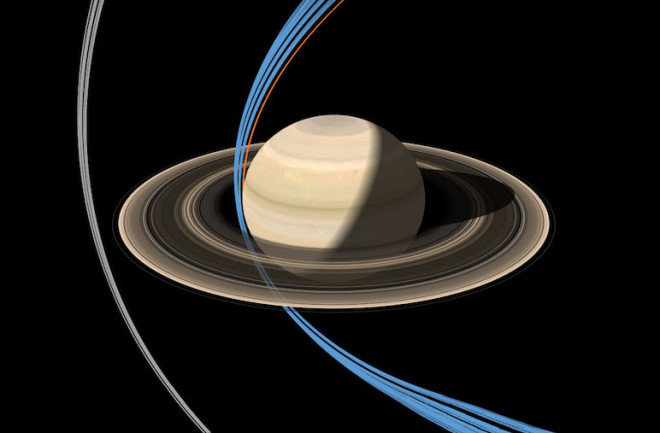 In April of this year, NASA nudged the Cassini spacecraft into an orbit that took it through a narrow gap between Saturn’s innermost ring (the D-ring) and the gas giant itself. Over the next few months, Cassini skimmed the upper atmosphere of the ringed planet nearly two dozen times.

During 11 of those orbits, Cassini’s Radio and Plasma Wave Science (RPWS) instrument took unprecedented measurements of Saturn’s ionosphere — a shell of charged particles that surrounds the planet and shields it from incoming solar radiation and cosmic rays.

In a study published yesterday in the journal Science, researchers using Cassini’s RPWS data showed that Saturn has a cold, compact and dynamic ionosphere with a density that can vary by as much as a factor of 100. Furthermore, the researchers found that Saturn’s enormous and opaque rings cast ionosphere-altering shadows over the planet, and they may even generate “ring rain.”

When Cassini traveled through the shadows of Saturn’s largest and brightest rings (the A and B rings), it measured a drastic drop in the amount of ionized plasma present, meaning the ionosphere got weaker when it was shaded. Though interesting, this is not entirely surprising. Ionospheres are produced when ultraviolet light from the Sun strips charged particles from atoms in the planet's upper atmosphere; so, it makes sense that Saturn’s ionosphere is weaker when the rings block incoming sunlight.

However, the team found that even when the planet’s rings veiled Saturn’s ionosphere, there was still measurable activity in the plasma. This indicates that sunlight is not the only thing that influences Saturn's ionosphere. Though researchers are not certain what causes the phenomenon, they theorize that Saturn’s innermost D-ring may be generating “ring rain” — where charged water particles embedded in Saturn’s rings migrate to the ionosphere, keeping the plasma mildly active.

“It is as though the small ice particles in the D-ring suck up electrons from the ionosphere,” said Jan-Erik Wahlund in a news release. “As a result of the coupling, electrical flows of gas to and from the rings along the magnetic field of Saturn cause the greatest variations in density.”

Since the researchers’ findings were based on just half the data Cassini collected during its orbital grand finale, it is safe to say there is much more left to discover.

“Consider this a prelude of things to come from Cassini,” said Hunter Waite, directory of planetary mass spectrometry at South West Research Institute, in a press release. “Saturn’s ionosphere is much more complicated than anyone could imagine.”