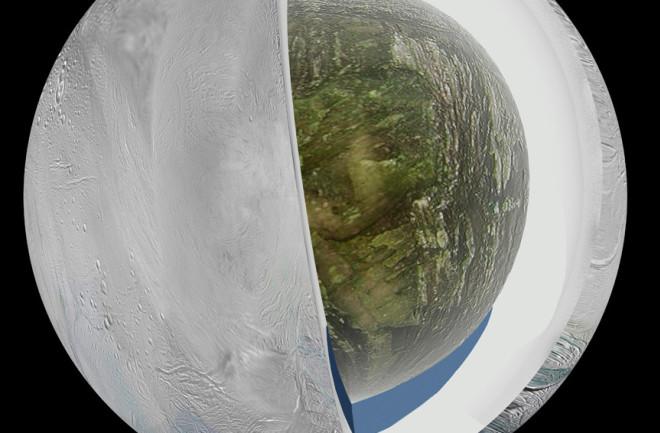 A large lake likely lies between the outer icy shell of Enceladus and its rocky core. | NASA/JPL-Caltech

In the search for life, astronomers follow the water. Ten years ago, the search led them to Saturn’s moon Enceladus, where they discovered several plumes on the south pole spewing water into space. In 2014, scientists finally found their source: a huge lake about 20 miles under the surface ice.

Luciano Iess of the University of Rome La Sapienza and his colleagues suspected such an underground reservoir might exist, so they used NASA’s Cassini probe to investigate. The spacecraft measured Enceladus’ gravitational tug at various points during three passes just 30 to 60 miles from the surface. The stronger gravity’s pull, the more mass lay directly below.

When Iess and his team spotted an unusually massive area near the south pole with no corresponding topography (a mountain, say), they realized that a denser material — liquid water — lurked below. The results showed this frozen world hardly the size of the Gulf of Mexico holds a 5-mile-deep reservoir about the size of Lake Superior.

A few months later, other Cassini researchers identified 101 distinct geysers on the moon. Those spouts offer many pathways for the water — and any other ingredients for life — to burst up through the surface.