Saturn's Moon Dione Has Mysterious Stripes All Across Its Surface 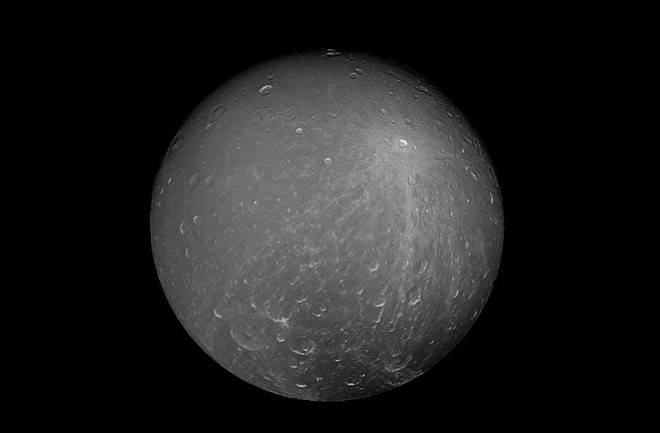 Saturn’s moon Dione appears to be getting its tiger on. The world is decorated with long, bright stripes, according to a new study, something astronomers say is unlike anything else they’ve seen in the solar system.

After first noticing these stripes, researchers from the Planetary Science Institute and the Smithsonian began trying to figure out where they came from and why they exist.

They were able to rule out tectonic origins for the stripes, things like faults. Instead, the bright lines, or “linear virgae” as the researchers call them, were probably caused by material falling from the heavens, study author Emily Marten said in a press release. The stripes’ components could have come from Saturn’s rings, a close-passing comet, or co-orbital moons Helene and Polydeuces, which orbit Saturn in the same orbital path as Dione.

To study the stripes, the pair studied images taken by NASA’s Cassini spacecraft over the period of about a decade and compared them to other linear features observed in our solar system. Saturn’s moon Rhea has features that look somewhat similar, but their distribution is very different than on Dione. The lines on Dione follow a straight line, but those on Rhea are more randomly distributed, the authors explain.

Dione’s stripes are long and thin — about 6 to over 62 miles (10-100 km) long and less than 3 miles (5 km) across. The stripes are also noticeably brighter than the area around them and parallel to the equator, which is very unusual. The fact that they are mostly intact indicates that they are relatively young, as well, and the authors suggest they could be due to an ongoing process.

Based on their analysis of the Cassini data, the authors think that the stripes are likely “draped” across Dione’s surface like new fallen snow. That is, the stripes lie on top of the moon’s surface features and don’t affect the underlying topography.

That means the material falling to Dione, wherever it’s coming from, is probably light and slow-moving enough to cover the surface without causing damage. The researchers have funding from NASA to continue their research with the Cassini data and find out whether or not whatever’s going on on Dione is going on anywhere else in the Saturn system.

The study was published in the journal Geophysical Research Letters.