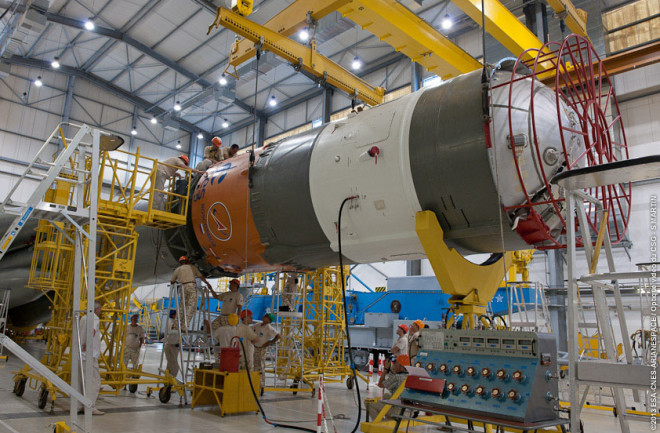 A Soyuz rocket launched the first four O3b satellites into medium-Earth orbit. Image courtesy of O3b. What did we do before Internet? Ask one of the 5 billion people on the planet today who still aren't connected to the World Wide Web. One company is trying to change that by launching a series of satellites that would provide fast, cheap Internet and phone service to remote areas in 180 countries. The satellites belong to a telecom company called O3b Networks, whose name represents the "other 3 billion" people they hope to bring online by the end of the year. The quartet of satellites launched yesterday in a Soyuz rocket from French Guiana around 3:30 PM Eastern will be followed by four more in September and another four next year. Each satellite will be able to transfer data at a rate of 12 gigabits per second. Other satellites may eventually be launched to increase the data capacity of the cohort. The project aims to provide cheap, fast data transfer to remote areas without Internet access or phone service. Investors including Google have already committed about $1.2 billion in support. Instead of being sold directly to customers, O3b plans to supply the bandwidth for voice and data traffic to mobile phone operators and internet service providers who will be able to track the satellites with ground stations. O3b hopes to reduce costs to make the service accessible and affordable, even in poorer regions.

Transferring the satellites. Image courtesy of O3b. This is not the first company to transfer data via satellite, but O3b's approach is unique. Most existing broadband satellites are locked in geosynchronous orbit, some 20,000 miles above the Earth's surface, where they remain stationary in relation to the Earth. One of these satellites can provide a beam large enough to cover most of the Earth, but the distance necessary to do this creates a delay in the transfer of data, meaning slow performance for users. Satellite phone companies, in contrast, are in low-Earth orbit, zipping around the planet only 1,200 miles above its surface. This speeds up the data transfer but requires far more satellites to cover the same amount of ground. The O3b satellites aim to split the difference by entering into medium-Earth orbit, 5,000 miles above the surface. The satellites will orbit the Earth around its equator, providing a connection that extends 45 degrees north and south, encompassing the areas with the world's highest population densities and poorest economies. Within this wide belt, a phone company or Internet service provider should be able to connect to one of the satellites in the system at all times. When one satellite disappears over the horizon, another will have already risen on the opposite horizon to take its place. In once-isolated regions of the planet, then, connection via voice and data will become as regular as the rising sun.