Sagan and Druyan: Shared Time in the Cosmos

Ann Druyan, Carl Sagan’s wife, wrote a beautiful piece for the Skeptical Inquirer back in 2003. It’s about science and religion, from a naturalist point of view, expressed in graceful and uplifting prose. An excerpt was shared around on Facebook recently by Michelle Agnellini Yaney, and is worthy of wider distribution. It’s a personal note at the end of the piece — as good a summary of how naturalists view the preciousness of life as you’ll find anywhere.

When my husband died, because he was so famous and known for not being a believer, many people would come up to me-it still sometimes happens-and ask me if Carl changed at the end and converted to a belief in an afterlife. They also frequently ask me if I think I will see him again. Carl faced his death with unflagging courage and never sought refuge in illusions. The tragedy was that we knew we would never see each other again. I don’t ever expect to be reunited with Carl. But, the great thing is that when we were together, for nearly twenty years, we lived with a vivid appreciation of how brief and precious life is. We never trivialized the meaning of death by pretending it was anything other than a final parting. Every single moment that we were alive and we were together was miraculous-not miraculous in the sense of inexplicable or supernatural. We knew we were beneficiaries of chance. . . . That pure chance could be so generous and so kind. . . . That we could find each other, as Carl wrote so beautifully in Cosmos, you know, in the vastness of space and the immensity of time. . . . That we could be together for twenty years. That is something which sustains me and it’s much more meaningful. . . . The way he treated me and the way I treated him, the way we took care of each other and our family, while he lived. That is so much more important than the idea I will see him someday. I don’t think I’ll ever see Carl again. But I saw him. We saw each other. We found each other in the cosmos, and that was wonderful. 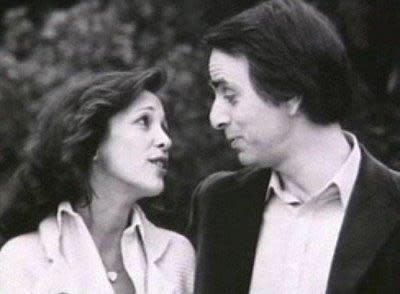 I can’t resist tacking on the previous paragraph, worthy of contemplation for its own sake:

And there were other instances of Carl’s remarkable persuasiveness. One was a great story of a so-called “creation scientist” who watched Carl testify at a hearing about creationism in schools. Carl testified for about four hours. It was somewhere in the South, I can’t remember where. And six months later a letter came from the “creation scientist” expert who had also testified that day, saying that he had given up his daytime job and realized the error of what he was doing. It was only because Carl was so patient and so willing to hear the other person out. He did it with such kindness and then, very gently but without compromising, laid out all of the things that were wrong with what this guy thought was true. That is a lesson that I wish that all of us in our effort to promote skepticism could learn, because I know that very often the anger I feel when confronting this kind of thinking makes me want to start cutting off the other person. But to do so is to abandon all hope of changing minds.

It’s hard to live up to Carl Sagan’s example.