A slumbering monster known as Sagittarius A* sits quietly at the center of our galaxy — for now. 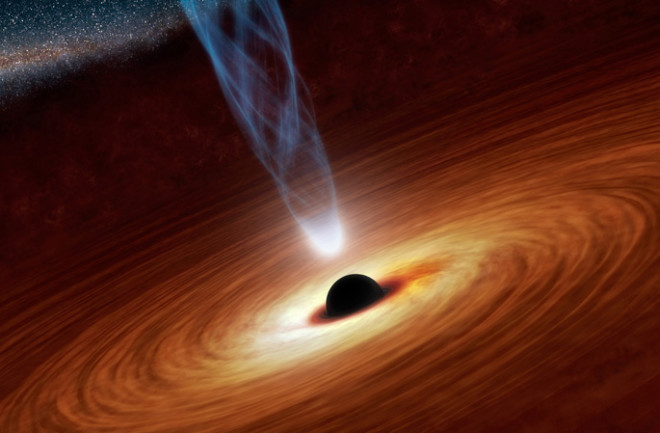 A supermassive black hole, like the one illustrated above, lurks at the center of our galaxy, deceptively quiet. | NASA/JPL-CalTech

The beast at the heart of our galaxy lurks so stealthily that for a long time many scientists were not certain it existed at all.

The first hint of that monster came in February 1974, when astronomers Bruce Balick and Robert Brown discovered an unusually compact source of radio waves at the exact center of the Milky Way, some 26,000 light-years away. Brown subsequently named this enigmatic object Sagittarius A* (pronounced “A star”), after the constellation where it appears in the sky. Then came more hints of something strange in the neighborhood: a trickle of X-rays from the same spot, tendrils of agitated gas surrounding it and, most telling, a small group of stars racing around madly for no obvious reason.

Tracking the motions of those stars enabled astronomers to estimate the mass of the unseen object directing the action. From there they built a convincing case that Sagittarius A* was in fact a black hole — the biggest one in the galaxy, with a mass 4.3 million times that of the sun and a diameter of about 25 million kilometers. At the black hole’s outer boundary, known as the event horizon, the fabric of space pours inward like a waterfall at the speed of light. Anything caught up in that flow takes a one-way journey to oblivion, winking out of our reality as it crosses the event horizon and then entering an inner realm cut off from the rest of the universe.

Given the incredible gravitational fury of Sagittarius A*, it seemed odd that such an object would be so calm. Now a team led by Maïca Clavel of Paris Diderot University has found that the black hole’s present mild demeanor hides a wild past. She has picked up echoes of Sagittarius A* roaring to life. Related observations show that even the black hole’s present slumber is not as peaceful as it once seemed. And more drama could be on the way, possibly later this year.

Gas cloud G2 (its orbit in red) approaches the black hole at the center of the Milky Way while stars (orbits in blue) whip around. This simulation shows true locations when G2 was found in 2011. | ESO

Rumblings at the Galactic Center

Left to themselves, black holes are almost completely inert. They turn ferocious only when they encounter any outside material, which gets swept into a rapidly orbiting swirl, or accretion disk, just outside the event horizon. As that disk spirals inward, it grows tremendously hot and radiates intensely. The fact that Sagittarius A* is currently so dim indicates that it must be on a starvation diet, with only a trickle of material leaking in.

But what happens, Clavel wondered, when it is feeding time at the galactic center? She and her colleagues pored over observations from NASA’s space-based Chandra X-ray Observatory to get some answers. From 1999 to 2011, Chandra has monitored the region around Sagittarius A*, recording an intriguing series of X-ray flickers.

In a new paper published in Astronomy & Astrophysics, Clavel identified those flickers as “light echoes” of some long-ago event. Brilliant outbursts of radiation from near the black hole had spread outward, struck iron atoms in surrounding gas clouds, and then reflected toward Earth, becoming visible here long after the original eruption. (Visit chandra.harvard.edu to watch a cool video of the light echoes.)

By meticulously analyzing the changing pattern of illumination, Clavel and company deduced that Sagittarius A* had experienced not one but two separate outbursts in the past few centuries. Many of the details got lost in the echo, unfortunately. “The precise dating of these two flares, their chronological order and the level of emission in between are difficult to assess,” Clavel laments. But the brightness of the echoes gives a good sense of the peak luminosity of the original events: When Sagittarius A* was acting up, it was at least a million times as energetic as it is today. Put another way, it briefly shone as brilliantly as a million suns.

As for why Sagittarius A* went haywire in the first place, Clavel and her colleagues offer several explanations, all of them pointing to the black hole’s intermittently savage nature. It might have stripped off the outer layers of a nearby star, caused a pair of stars to interact and consumed the released gas, or swallowed some planets whole.

In fact, other researchers may have already caught Sagittarius A* in the act of such a feeding frenzy, albeit on a much smaller scale. Every day or so, Chandra captures modest flare-ups during which the black hole brightens up to a factor of 160 for a few hours. Astronomer Kastytis Zubovas interprets those events as the burps caused when an asteroid or comet, at least 10 kilometers across, passes within about 100 million kilometers of the black hole, quickly getting shredded and consumed.

The centuries-old twin eruptions of Sagittarius A* deduced by Clavel may also explain why our monster black hole is such a shrinking violet today. One of the many paradoxes of black holes is that in the act of feeding, they tend to starve themselves. The outbursts probably cleared gas from the immediate region: With no material falling in, Sagittarius A* fell into a near-dormant state.

These antennas at the Atacama Large Millimeter/submillimeter Array in Chile will observe the black hole in unprecedented detail as part of the Event Horizon Telescope project. | ALMA (ESO/NAOJ/NRAO, Adhemar Duro)

Black hole researchers dream of getting to watch one of the awakenings of Sagittarius A* as it happens. To their delight and amazement, they may get their wish soon. (Don’t worry; we are plenty far enough away to be safe.) Even as you read these words, a large gas cloud known as G2 is whipping past the black hole at 10 million kph. It is the first time scientists have ever seen such a thing.

The latest studies by Stefan Gillessen of the Max Planck Institute for Extraterrestrial Physics in Germany show that the black hole’s potent gravity has warped G2 into a long, snaking blob, with the leading part already coiled all the way around Sagittarius A*. At its closest, G2 will pass about 25 billion kilometers from the event horizon, far enough that it is unlikely to get entirely sucked in. But the cloud is so elongated that it will take a full year for all of it to clear the black hole, and there is plenty of room for surprise.

G2 might make fireworks another way, because Sagittarius A* is probably surrounded by smaller black holes. Much as hair collects around a bathtub drain, the most massive objects in the Milky Way tend to spiral downward toward the center. As a result, an estimated 20,000 black holes, each about the size of a city and containing a few times the mass of the sun, are thought to be circling Sagittarius A*. As G2 blows past that dark swarm, the smaller black holes may scoop up bits of loose gas and light up with bursts of X-rays that could be visible to Chandra or NASA’s NuStar space telescope.

Whatever happens as Sagittarius A* and its companions awake, astronomers will be watching with unprecedented acuity. The Event Horizon Telescope project is starting to link about a dozen different observatories around the world to create, in effect, a single radio receiver as big as Earth. The name gives away the project’s goal: to resolve the details happening right at the event horizon of Sagittarius A*, 26,000 light-years away.

What does a monster look like up close? We are about to find out

[This article originally appeared in print as "When a Slumbering Monster Awakens."]